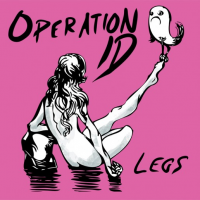 The cover art for Operation ID's debut CD recalls the work of Raymond Pettibon. whose indelible images burst forth from the covers of LPs by Black Flag, Minutemen, and Saccharine Trust on the iconoclastic SST label, back in the 1980s. Though it's directed toward a different end result, the music on Legs has a relentless energy and DIY attitude that's allied to the SST ethos. These are guys who will do anything to get their music across, and while they play and compose with reckless abandon, this CD possesses a sort of nerdy, virtuosic pinpoint control. While not a jazz CD per se, the complicated, multi-sectioned compositions on Legs proceed with a palpably jazzy flow.

Operation ID is not too far from Led Bib, Gutbucket, Algernon, and other adventurous neo-prog fusion bands that don't quite fall into the "post-rock" category. Drummer Evan Woodle—who also plays with the stylistically similar Chemical Clock and trumpeter Cuong Vu's Agogic—and guitarist Jared Borkowski are jazzers to the core, but refer to it on a subconscious level. The music here really seems to be going somewhere else. Saxophonist Ivan Arteaga has a brittle, almost squawky sound that really cuts through the accumulated sonic mass of guitars, drums and keys. Bassist David Balatero and synthesist Rob Hanlon keep a lower profile, but are no less interesting as players. There's so much going on here that it's almost impossible to single out anyone's individual contributions. It's all rather mindboggling.

ADVERTISEMENT
It's also difficult to pick out the standout tracks; really, they all stand out. The minimalist experiment ..."Warning" is a real stunner. Propelled along in a 5/4 meter by intertwining saxophone and guitar lines, the coruscating melodies interact and recede while electronic and acoustic percussion patters around like an eager puppy. The piece ebbs and flows, finally resolving in a metallic coda with a strangled yelp from Borkowski's guitar. "Empty Space," despite a mass of layered guitars and orchestral 70s-era synth lines, has real lightheartedness and whimsy, thanks to Arteaga's perky saxophone lead. There's also some unexpected (and uncredited) vocal work here that is really spot-on. "Frightened Explorer" is similarly intricate, and no less goofy. Here, it's Hanlon's deliberately cheesy keyboard sounds providing the comic relief. "Here I Am" and "Where Are You" are sister compositions—one seems to complete the sentence started by the other.

With a single stroke, Operation ID has positioned itself right at the top of the avant-prog heap. Legs is quite an achievement. It's the sort of CD that reveals something new with each listen, and it's one of the year's best.

Track Listing: Here I Am; Think Accessories; ...Warning; Seal Your Sight So Your Body Is Gone; Different People's Perception of the Same Thing; The Muse; Where Are You?; Empty Space; Frightened Explorer.