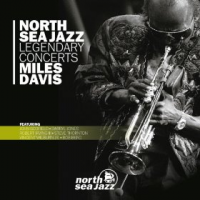 Like the curate's egg, parts of trumpeter Miles Davis' 1980s recordings and performances were excellent, and others considerably less so. The 1985 Columbia album, You're Under Arrest—of which the CD/DVD set Legendary Concerts was a partial live performance, with one important personnel change—was the strongest of the early to mid 1980s albums, on which keyboardist Robert Irving 111's heavy on the back beat groove-arrangements, first heard on The Man With The Horn (Columbia, 1981), and Davis' increasingly minimalist playing, meshed most convincingly.

Legendary Concerts was filmed at a performance in The Hague's Tuinpaviljoen in 1985 and is part of the eponymous, and outstanding, series from the North Sea Jazz festival. Longtime Davis drummer Al Foster, no fan of Irving's approach, is replaced by Vincent Wilburn Jr, an altogether more groovalicious player. Wilburn is aided and abetted by bass guitarist Darryl Jones, who joined Davis' band for Decoy (Columbia, 1984), replacing Marcus Miller. Jones is a great rock bassist (he replaced Bill Wyman in the Rolling Stones when Wyman retired in 1993), less flashy than Miller but bringing a good deal more in-the-moment passion to the proceedings. Guitarist John Scofield, saxophonist Bob Berg and percussionist Steve Thornton are retained from You're Under Arrest. Guitarist John McLaughlin, also on the studio album, has gone. It is a kicking band and, Davis aside, a young one.

The DVD, which includes two tunes not included on the CD, is also great theatre. Davis' live performances were visual events almost as much as they were musical ones and, at the Tuinpaviljoen, wearing an exuberant sci-fi meets Michael Jackson assemblage, Davis is a charismatic presence. He takes no lengthy solos, instead spending much of the time directing (and at times coercing) his band. Playing or directing, he commands the stage.

About half the performance was drawn from You're Under Arrest, with the addition of a couple of tunes from Star People (Columbia, 1983) and Decoy. In 1985, this music was not jazz as most people knew it, but it was, and remains, compelling stuff.