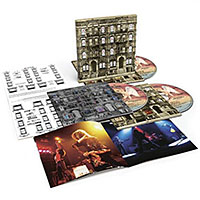 But Swan Song was also intended, of course, to release Zeppelin's subsequent recordings, and if taking a two-year break between Houses of the Holy and its first Swan Song set, 1975's Physical Graffiti, did anything, it was to give the group a chance to regroup, refresh and reconsider.

The result is a sprawling two-LP set that ranks amongst the group's best. Despite three more studio records to come, it is also considered by many to be the group's last great record. Listening to Physical Graffiti (Deluxe Edition)—as with previous 2014 reissues, lovingly remastered by Page individually for CD, vinyl and digital downloadable editions and packaged, for the first time on CD, to reflect the original vinyl edition (in this case, with images of New York City tenement block with interchangeable window illustrations)—it's easy to understand why.

If Led Zeppelin's initial burst of psychedelia-infused blues-rock was not generally considered to fit the definition of progressive rock—though in the early days of the genre, there's little doubt that the group adhered to the dictionary definition of the word—Physical Graffiti leaves little doubt that the group was, at the very least, on the periphery of a sub-genre more closely associated with groups like King Crimson, Yes, Emerson, Lake & Palmer and Genesis. While still largely exploring the possibilities of positively massive, riff-driven music—bolstered by Bonham's thunderous kit work, Page's largely blues-based but ever-inventive guitar work, Jones' anchoring bass and increasingly broad use of keyboards to provide greater orchestral potential, and Plant's visceral, in-the-moment vocal delivery—Zeppelin's second album of all-original music was its most expansive and exploratory yet. And, unlike Houses of the Holy, there's nary a weak track to be found amongst its 15 tracks, spread across 83 minutes.

There's still plenty of blues posturing to be found—albeit, more often than not, transmogrified into something that resembles the relatively simple form but is far more complex. The catchy opener, "Custard Pie," is essentially a blues but with the three-chord form expanded, even as Plant's lyrics go beyond the suggestive to the positively explicit in this story of infidelity and, well, oral sex. Still, it's hard not to feel the urge to sing along to Plant's repetitive "I chew on a piece of your custard pie." On the flip side, Plants lyrics have never been more authentic than on the album's longest track, "In My Time of Dying," where the protagonist is begging God to let him come to heaven with the belief that "I must have did somebody good" and that "All the wrong I've done / You can deliver me, Lord / I only wanted to have some fun." With Page's slide guitar redolent of the Mississippi Delta, the 11-minute epic moves from one riff-driven section to another, with spacious, no-time vocal sections breaking them up. It's a far cry from the psychedelic-driven blues of Led Zeppelin's "You Shook Me," or the more definitive blues-rock of "Since I've Been Loving You," from 1971's III.

But it's a diversity that transcends the even broader-minded IV and flawed but still admirably searching Houses of the Holy that makes Physical Graffiti such a landmark album—a high point amongst high points. Page's solo acoustic feature, "Bron-Yr-Aur," returns to Led Zeppelin's Celtic-inflected "Black Mountain Side," proving that Page's pre-Zeppelin, pre-Yardbirds days as a much in-demand session player were well-warranted. It's also the perfect track to follow "In the Light," which, over nearly nine minutes, travels from Jones' Highland-invoking, drone-based synth intro to more quintessential Zeppelin, with Plant's words suggesting to a trouble-weary friend that "If you feel that you can't go on / And your will's sinkin' low / Just believe and you can't go wrong," even as the music implies something much darker, before Jones' electric piano turns from minor key to major...and a truer sense of hope.

One of the group's most complexly structured songs to date, ultimately it's still the harmonically sophisticated "Kashmir" that would justifiably go on to become one of the group's most instantly recognized and popular post-IV songs. Despite being an eight-minute, radio-unfriendly, pedal tone-heavy Middle-Eastern-tinged track pushed hard by Bonham's relentless backbeat, Jones' Mellotron-driven orchestrations and Page's combination of imaginative lines and equally innovative (and unmistakably progressive-oriented) voicings, it's the very combination of these elements and some of Plant's most spiritually driven lyrics yet that turned it into a staple of album-friendly FM radio back in the day.

As with previous reissues barring Led Zeppelin's second disc of a 1969 live show, Physical Graffiti (Deluxe Edition)'s bonus third CD is a mélange of seven rough and Sunset Sound mixes or early versions, and for the most part will be of interest only to those who want to hear how a band works its way through to its finished versions. But barring an altered look at "Sick Again"—and, in particular, "Everybody Makes It Through (In the Light Early Version/In Transit)," which suggests a very different potential outcome to that ultimately heard on the album—there's little of the real eye-opening revelations of Peter Gabriel's So DNA disc, included in his So (25th Anniversary Deluxe Box Set) (Real World, 2012), or King Crimson's We'll Take That One, Nick collage CD, part of its 15-disc Larks' Tongues in Aspic (40th Anniversary Series Box) (Panegyric, 2012). Still, those two tracks alone make the bonus disc for Physical Graffiti the best one since Led Zeppelin, even if they only add up to nine of its 41 minutes.

Physical Graffiti's being something of a pastiche—comprised of eight tracks recorded for an album that exceeded the optimal length for a single LP and so, was expanded by the group to two LPs with the inclusion of unused tracks from III (one), IV (three) and Houses of the Holy (three)—makes it all the more remarkable that it's such a cohesive set that ranks amongst the group's best. While there's little reason to doubt that plenty of work went into the selection of the added tracks and their places across the two discs, it's also a truth that sometimes serendipity happens when you least expect it. Going 16x platinum in the USA alone (2 x eight platinum, being a double album), Physical Graffiti would be followed by two more studio records—1976's Presence, with its progressive-leaning epic "Achilles' Last Stand," and 1979's true swan song before Bonham's tragic death, 1979's In Through the Out Door—that were undeniably fine, but neither sets (nor 1982's posthumous collection, Coda) achieved the innovative heights of Physical Graffiti—Led Zeppelin at some of its most exploratory and imaginative best.