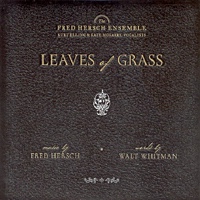 Only two months into 2005 and already there have been a number of early contenders for the year's top ten lists. Add to that growing number pianist Fred Hersch and his ensemble's Leaves of Grass , an album that sets the poetry of Walt Whitman to music with elegance and dignity. While structure far outweighs experimentation on this release, the most ambitiously through-composed work of Hersch's career, there is still plenty of engaged interplay to support Whitman's eloquent words. In fact, the link between Whitman's idiosyncratic language and the improvisational nature of jazz make for less strange bedfellows than one might think.

Much as a good filmmaker must whittle down a novel to its essence in order to translate it into a two-hour movie, Hersch had to selectively narrow down a book of over 600 pages to its core in order to fit a 68-minute musical programme. Concentrating on the key elements of living in the moment, the miracle of nature, freedom of personal expression and a love of all beings, Hersch has fashioned a libretto from Whitman's words that tells a compelling story, especially when supported by a score that thematically links the chosen verses together.

Assembling an octet that incorporates trumpet, trombone, reeds, cello, piano, bass and drums with two voices, Hersch has fashioned an oratorio that has the benefit of a wide range of musical textures within a small-scale ensemble. While the emphasis is clearly on the lush score that supports the poetry, all the players get brief moments in the spotlight, although what really makes this programme work is the composition itself, which is as graceful as Whitman's words. What is most remarkable about the recording is how well-integrated the music and libretto are. From the pomp of "I Celebrate Myself"? to the calm of "The Sleepers"? and the closure of "After the Dazzle of Day,"? Hersch has found a way to blend spoken word and song with a musical context so seamless that it is almost difficult to imagine the two existing independently.

Vocalists Kurt Elling and Kate McGarry (replacing Norma Winstone, who premiered the piece in its first performance) are perfect choices for their roles, which require the kind of subtlety in emotiveness that demand impeccable technique combined with a true understanding of the text being delivered. Elling, who dominates the eleven-part "Song of Myself,"? conveys a gamut of emotions with the most refined of touches, while McGarry ranges from whisper-like delicacy to more dramatically moving passages.

The musical and lyrical links which give the recording its sense of continuity make it essential to experience in its entirety, rather than in discrete sections. Hersch's ability to find these links is a testament to his growing strength as a composer. Other albums this year may be more overtly improvisational, but it is difficult to imagine another release that can match Leaves of Grass for its sheer beauty and its inspirational and aspiring sense of purpose.

Visit Fred Hersch on the web.

A Riddle Song (overture); Song of the Universal; Whoever You Are Holding Me Now in Hand; Song of Myself: Part I ("I Celebrate Myself"); Part II ("A Child Said, 'What is the Grass'"); Part III ("A Learner With the Simplest"); Part IV ("I Exist as I Am"); Part V ("I Am He That Walks"); Part VI ("Through Me Forbidden Voices"); Part VII ("Now I Will Do Nothing But Listen"); Part VIII ("I Believe a Leaf of Grass"); Part IX ("I Fly Those Flights"); Part X ("My Lovers Suffocate Me"); Part XI ("Why Should I Wish to See God"); The Mystic Trumpeter; At the Close of the Day (instrumental); To You/Perfections; The Sleepers; Spirit That Form'd This Scene/On the Beach at Night Alone; After the Dazzle of the Day