BY JAMES TAYLOR
February 21, 2005
Sign in to view read count 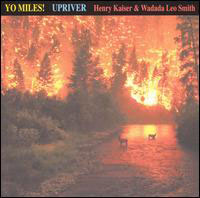 Upriver , the third double-disc offering from guitarist Henry Kaiser and electrified trumpeter Wadada Leo Smith's Yo Miles! project, features the duo and their ever-changing band taking on Miles Davis' most adventurous tunes: "Bitches Brew,"? "Yesterfunk,"? "Black Satin,"? and a medley of other on the corner jams.

The tunes collected on Upriver are hardly covers in any sense; instead, Smith, Kaiser & Co. use Davis' groove-heavy compositions merely as a framework, a starting point from whence they begin their own sonic explorations. More elastic and expansive than the milder fusion bands that followed him, Miles Davis' 1970s output (his "new directions in music"?) provide the perfect palette for the avant garde Smith, the missing link to Kaiser's Yo Miles! project, added in 1998.

Smith says of Yo Miles!, "We think we understand what Miles meant by that music ... we feel strongly that we really touch the core of it, not in note selection, but in terms of certain devices he used in his music, such as tension and contrast."?

In addition to Henry Kaiser's whirling guitars and Smith's electric trumpeting, Yo Miles! features Mike Keneally and Chris Muir on electric guitars; Michael Manring on bass; drummer Steve Smith with Karl Perazzo and Tom Coster handling auxiliary percussion; M-Base member Greg Osby and the powerful John Tchicai on sax; and special guests Zakir Hussain on tabla (gotta have the tabla if you want to sound like Miles circa 1973), guitarist Dave Creamer, and the ROVA Sax Quartet.

For the most part, Yo Miles!' interpretations of Davis' post- In a Silent Way catalog is dead on. While some of the lengthy jam segments leave something to be desired in the way of adventurous, boundary-bending improvisation—the kind of stuff we all know Smith, Osby, and Tchicai to be capable of— Upriver is still a solid reinterpretation of Miles' music. If anything, the group deserves all praises just for having the will, energy and fearlessness to tackle this, some of jazz's most under-appreciated and misunderstood music.

Note: this is a dual-layer CD/SACD hybrid recording.

About Yo Miles! Henry Kaiser and Wadada Leo Smith