BY FRIEDRICH KUNZMANN
January 5, 2019
Sign in to view read count 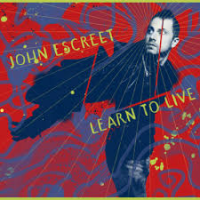 Take some sweet melodies from Jeff Lynn's ELO, add Keith Emerson on synth and think of an underlying rumbling towards more experimental sound collages, rooted somewhere between the electronic approach of Brian Eno and Miles Davis' early organic-fusion extravaganzas and you'll end up with... well, let's be honest, it still won't sound anything like what keyboardist / composer John Escreet has to offer on Learn to Live . While one preferably shan't judge a book by its cover, his first effort of original compositions in five years is somewhat of an exception, for its content is just as colorful and explosive as suggested by the flamboyant wallet it arrives in. Even the strangeness in Escreet's eyes seems reflected in the music.

Of course, the opening accumulation of references wasn't born out of thin air. Escreet's compositionally eclectic and synth-heavy approach doesn't make for easy listening and the presence of two drummers in stereo only amplifies the hyper-action. The overture, aptly titled "Opening," encompasses the main ingredients this record dwells on: various key-sounds, from the classic Prophet-layering to mild Fender Rhodes textures to acoustic piano, are guided by two seemingly untamable drummers on both sides—Eric Harland and Justin Brown—creating a wall of sound that accommodates few but fierce harmonic changes. During this energetic interplay, a simple melodic immediacy prevails. If it ended after a minute it wouldn't seem misplaced on a Toto or ELO album.

Freer exercises, such as the quietly boiling "Broken Justice (Kalief)" and even rougher "Test Run" (no reason for doubt about it being exactly that), give the musicians more space to unfold in and thereby establish a roomier ambiance. "Lady T's Vibe" or the title track on the other hand demonstrate a further facet to the musicians' repertoire by introducing R 'n' B and Dance to the mix, culminating in an acid-jazz fest.

But compartmentalization in genres and references won't do this record justice and certainly can't describe the fire which the group undoubtedly is on when "Smokescreen" or "Global Citizen" start taking off. Pairing two drummers is always a huge task, musically and from the technical point of view of the engineer in charge of mixing. Both are mastered with aplomb and make for an intense ride. So, can two drum sets be too much? Yes, absolutely. Is "too much" a whole lot of fun? Yes, absolutely.