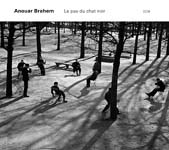 The outstanding clarity of Anouar Brahem's new trio record demonstrates the composer's ability to combine several cultural influences without sounding contrived or disjointed. For this project, Brahem composed 12 pieces for the most unusual combination of piano, accordion, and oud (a type of lute). The music came out of a long period of listening and composing on piano in Tunis, where Brahem found himself unable to return to his voice on the oud after an intense session for 1997's Thimar. As he developed his ideas, Brahem returned to the oud and assembled a final version which also includes pianist François Couturier and accordionist Jean-Louis Matinier.

What's most remarkable and surprising about Le Pas Du Chat Noir ("the black cat's footsteps") is that music composed with such attention to detail can be transmitted through the right hands into a thoroughly improvised feel. Make no mistake, this is chamber music: understated, deliberate small-group interplay. But at the same time, it offers dramatic waves of sound that wash ashore in tidal fashion. The overtones of the string instruments here allow an effective means to color notes, while the accordion provides a feeling of breath and inspiration. As for the trans-cultural underpinnings of Le Pas Du Chat Noir, it's hard to separate the intertwined strands—as hard as it is to dissect the culture of Tunisia itself. But the rhythms suggest the striding pulse of North Africa and the lilting lightness of Eastern Europe; the harmonies often occupy the ground of Northern European neoclassical minimalism; and melodies regularly take advantage of the minor modes of Arab and Middle Eastern music. (And, of course, each instrument brings with it a specific musical tradition, in this specific case straddling the boundaries that make up post-colonial Tunisian musical culture.)

Le Pas Du Chat Noir is a recording of exquisite sensitivity and nuance, tilted toward composition despite an palpable improvisational feel. Brahem has thrown a most unusual cocktail of musical elements into his blender in order to create this chamber music. The record may deviate far enough from the jazz tradition to disappoint die-hard afficionados of improvised solos, standards, and swing. But if you're willing take Le Pas at face value, it's mesmerizingly beautiful.