By MARK SULLIVAN
November 1, 2016
Sign in to view read count 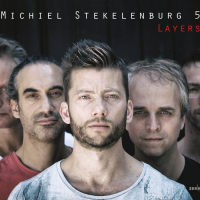 Dutch guitarist/composer Michiel Stekelenburg expands his group to a quintet for his second album as a leader. Joined by saxophonist Efraim Trujillo, pianist Jeroen van Vliet, bassist Guus Bakker, and drummer Pascal Vermeer he presents a sharp set of contemporary jazz originals. The opener "024" begins with folk guitar strumming, a sound recalling Pat Metheny, clearly a significant influence. That impression is confirmed by the implied dedication in the closing tune's title "Letter To Missouri" (Metheny's birthplace).

The strumming is followed by the insistent odd-meter ostinato of "Spudneck," then the ballad "The Nephilim." Trujillo sings on the long saxophone line of the theme, and the leader turns in a lyrical guitar solo. "Slowpoke" earns its title by the long, slow build over the course of the piece: this is a band that can hold back when necessary. "Viñales" (presumably taken from the name of a small Cuban town) features acoustic guitar layered with electric guitar, and a subtle Latin feel.

The aptly named "Jazzz" gives the group a chance to swing in an alternating section with walking bass—Trujillo and Stekelenburg blow hot on this one. "Morning Song" showcases the saxophone again, with an exciting solo over the closing vamp. The previously mentioned "Letter To Missouri" closes the album on a chamber jazz note. Acoustic guitar and Bakker's bass play a duet, which is eventually joined by an overdubbed electric guitar solo: a lovely, low key ending.

An excellent, varied set of contemporary jazz. Stekelenburg shines as composer and guitarist, and his fine band never fails to deliver. I look forward to hearing more from all of them.