Maximize your visibility at All About Jazz by upgrading your musician page from standard to premium. With it, you'll receive All About Jazz home page exposure, a highly stylized / ad-free musician page with bonus features and benefits, an ad, plus you control where you sell your music and so much more.
Learn More
263 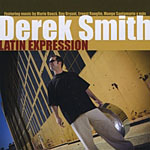 The title of Derek Smith's Latin Expression falls somewhat short of the actual experience. It does not even begin to describe the utter joy that arises from the resonant, fluttering, dancing music that swathes the record. Perhaps "Latin Explosion" might have been more appropriate? Steel panist/vibraphonist Smith plunges, body and soul, into a veritable carnival of Afro-Caribbean sounds, acquitting himself with distinction.

To many it might have been a challenge to switch back and forth between pans and vibes and expect the same effect, but Smith has mastered the nuanced differences between the resonances of the two instruments. Accordingly, he employs a subtly different attack to gain an appropriate after-burn from phrase-ending notes on the pans, in order to make them hang. His sliding dynamics on the vibes create diaphanous echoes that follow notes sounded by furrier mallets, and the effect he achieves is wholly absorbing.

Nowhere is this more delightfully evident than on "El Cumbanchero." But the spirited kick in "Mambo Inn" comes a close second in the showcasing Smith's wizardry with the mallets. That is the first track on an album where the level of exuberance seems to rise song-after-song, peaking again on "Son de la Luna," Miguel Matamoros' classic son. Mongo Santamaria "Besame Mama" features a stellar turn by Smith on pans, with a wonderful, angular attack and rapid-fire runs that includes the higher register of the instrument. The song also grabs attention because of the empathetic relationship that Smith enjoys with pianist Jason Moen, who dazzles by mimicking a guitar on the keyboards, complete with strumming effects.

"So Danco Samba" retains its samba rhythm, thanks to fine work by bassist Aaron German and percussionists Colin Douglas and Mike Shannon. But surprisingly, the band turns it into a Caribbean feature as Smith rocks the pans. In the capable hands of this ensemble, Ray Bryant "Cubano Chant" is fashioned in a graceful vocal manner, also featuring Colin Douglas' exquisite percussion coloring. Jovino Santos Neto, who is fast gaining recognition for his extraordinary music, is represented by "Sempre Sim," which features a wonderful melody full of almost ghostly quarter tones in its harmony.

Derek Smith's own compositions—"Mi Cancion" and "Here We Go"—possess fine, strong melodies and auger well for the development of this hard-working musician, who will surely become a headline act in the realm of Afro-Caribbean music.