BY EYAL HAREUVENI
February 10, 2014
Sign in to view read count
The 2012 edition of the Copenhagen Jazz festival offered a musical snapshot of the vibrant and varied Danish improvisational scene and its strong ties with other European improv scenes. The festival hosted 18 concerts, organized by the music collective and record label Barefoot Records. Half of those concerts were recorded, enjoying the presence of many guests and ad-hoc outfits. The following albums feature a few of the highlights from that festival, with prominent members of this collective and two similar live recordings of collective members presenting mostly improvised music. 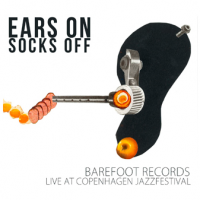 The first disc of this arresting compilation from Copenhagen Jazz Festival 2012 features two long improvisations. The first is of the ad hoc outfit Her Majesty's Ship—Swedish saxophonist Sture Ericson, Finnish guitarist Markus Pesonen, and Norwegian drummer Håkon Berre— augmented with Chicagoan cellist Fred Lonberg- Holm. The outfit's interpay begins with loose sonic exploration and slowly settles into an intense, focused improvisation with beautiful, lyrical solo parts by Lonberg-Holm and Ericson. Estonian composer Maria Faust's all-female Pistol no. 9 released their debut Fest på Amager in 2012. Its long piece, "Auricula" is an enigmatic composition that progresses from delicate and subtle sounds of Faust's sax, trombone, micro-guitar, electronics and drums to a restless and intense mix of otherworldly sounds locked in a soft industrial pulse. This disc concludes with a chamber improvisation by pianist Morten Pedersen and cellist Thommy Andersson that sketches a disturbing soundscape.

The second disc begins with a meeting of the trio Angel— guitarist Stephen Sieben, double bassist Adam Pultz Melbye and drummer Berre, that released their debut Live at KKI in 2012, with Lithuanian reed player Liudas Mockūnas. Mockūnas leads this trio with a remarkably muscular playing that forms an uplifting, explosive interplay. The ad hoc outfit St. Andby— Ericson, guitarist Anders Lindsjö and Melbye—hosts Swedish vocal artist Sofia Jernberg in an amusing and playful improvisation that emphasizes Jernberg's imaginative vocal range. The trio Dødens Garderobe, who released their debut with sax great John Tchicai earlier in 2012, present concise and fiery improvisation. Faust and Mockūnas offer one of the most fascinating pieces in this compilation, a passionate and talkative reeds duet that features inventive use of extended techniques , all employed in the service of a detailed story which unfolds with surprising shifts in plot, humor and irony. In this compilation with the trio that later recorded influential electric bassist Peter Friis Nielsen's debut, Himlen Under Os (Barefoot Records, 2014), Friis Nielsen leads reeds player Lars Greve and drummer Berre in a subtle, slow burning search for common sonic ground.

This album was recorded live at the Dexter club in Odense, Denmark, documenting the entire third and last concert of a short tour in June 2012. The trio is comprised from strong and original improvisers—German alto saxophonist Henrik Walsdorff, member of influential Alexander von Schlippenbach's legendary Globe Unity Orchestra, Danish bassist Adam Pultz Melbye and drummer Kasper Tom Christensen. Both are members of the Barefoot Records musicians collective and both have experienced playing with forward-thinking improvisers from all over Europe.

The performance highlights the immediate, conversational interplay that the trio developed almost instantly. All five long pieces are freely improvised, rooted in the European legacy of free jazz of the sixties but not committed to it. The trio opt for an organic flow and slow-burning development. Tension is built patiently, reaching muscular , powerful eruptions only toward the end of the concert , on the the climatic "Ende," though intense interaction is kept from the first note till the last one. All three players exchange leading roles with the open, loose pulse and shifting rhythms leaving generous space for impressive solo articulations. Still, these improvisations suggest coherent and focused progression.

This powerful Danish- Norwegian jazz piano trio recorded their self titled debut in 2007, also released on Barefoot Records. This sophomore release was recorded live at the legendary Glenn Miller Café in Stockholm in November 2011, after a short European tour.

The trio— Danish pianist Morten Pedersen and double bassist Adam Pultz Melbye and Norwegian drummer Håkon Berre,are all founding members of the Barefoot Records collective. This recording emphasized their compositional. The talkative, noisy club atmosphere in the small space initially interferes with the music, but again and again the trio wins the audience's attention.

Pedersen's opening "Central Park Houdini"is structured almost as a classic jazz composition, with a strong, infectious and rhythmic foundation, concise improvisations, then back to the theme with much looser interplay. His closing "Sneaky," patiently gravitates to its own strong theme. The two longest compositions, the 26- minute Pedersen and Melbye's "Incommunicado/Proxylakkt; Objekt" and the 16- minute "Nature morte à la palette" by Berre, enable the trio to abstract thickly nuanced dramatic narratives. There are constant shifts in pulse, and dense interplay with open, exploring solo parts without losing focused flow and tension.

Other compositions emphasize the breadth of the musical vocabulary of this trio. Berre's "Lost at Sea and Never Found" is an enigmatic, minimalist sound poem. Melbye's "Kassiopeg" and "Ublit" intensify this exploratory thread with open-ended, sound oriented improvisations.

Ears On / Socks Off