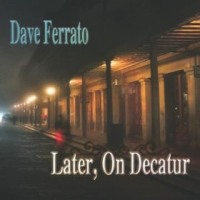 Dave Ferrato is a musician's musician who has been buried deep in the New Orleans club scene for the last 30 years. The guitarist/songwriter has developed a keen eye for the underside of the Crescent City and is able to share this world through simple and elegant tunes that have been well orchestrated on Later, On Decatur by a few musical friends he has met on this journey. He is joined on this CD by numerous New Orleans icons including Austin Lee Harris on several vocal arrangements, bassists George Porter, Jr and Jim Singleton, drummer Johnny Vidocovich and horns from iconic brass band Bonerama, including Craig Klein, Greg Hicks, and Mark Mullins. Mullins serves as producer for the album and plays trombone on several numbers.

Several standout tunes include the "Tchoupazine Triangle," an area many residents and lovers of New Orleans will recognize as a location in the Uptown section of the city between Magazine and Tchoupitoulas Streets, known for its college bars and small music clubs. It is a haunting tune about an area that has claimed more than a few new residents who are not familiar with the Siren-like nature of this area outside of the French Quarter and get caught in the seductive web of the bar scene.

The title number, "Later, On Decatur," is a beautifully orchestrated tune about the late night after-hours scene on the street nearest to the Mississippi River. A slow bass line, electric guitar, violins, organ and a seductive trombone solo by Mullins all add to the sultry feel of this tune. Anyone who has had the energy and desire to stay up all night in the after-hours clubs and watch the sun come up in the French Quarter, as Ferrato and the musicians who play this song from the heart obviously have, will understand the beauty of this tune. It is sure to become a New Orleans classic.

Ferrato's first CD has been thirty years in the making and his very talented friends have come together to help in his effort. Several tunes will surely become New Orleans classics as they are replayed on local radio stations. It may even tempt those who have not to investigate this nightlife in a city that really never sleeps. Just be careful, the Sirens are waiting, and Dave Ferrato has warned you.

Same Old Story; Candy Lady; Walkin' Down; Round Here; Later, On Decatur; Feelin' So Unnecessary; Faces Change; You Been Runnin'; Tchoupazine Triangle; Back For More; Benny Walk; When I Get Home; Faces Strange; Changed Man.