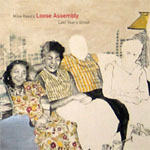 482 Music was responsible for one of 2006's most iconoclastic releases, in the form of Intents & Purposes by Kyle Bruckmann's Wrack. This debut by drummer/composer Mike Reed and his group is not on the same level in terms of the way in which it fundamentally breaks with a lot of what has already gone down in the past. The fact remains that this is a program of music that's equally uncompromising, albeit in a more unassuming way.

Reed's compositions tread a tightrope between being loose foundations for improvisation and having a distinctive identity of their own. That they manage to reconcile these seeming opposites is to his lasting credit. Something like "Day Of The Dead exemplifies this nicely, and the work of vibraphonist Jason Adasiewicz is that of a man who, if anything, shows a trace of the influence of Walt Dickerson. Alto saxophonist Greg Ward similarly offers up ample evidence of the work he's put in to getting his own identity on this one.

"Afterthoughts is an exercise in stately progress by comparison, enhanced in no short order by the group's alertness to every nuance of Reed's composition. Tomeka Reid's work on cello here is by turns in marked contrast to the work of David Eyges; where that musician often happily brings an earthy approach to his instrument. Reid's work here is a model of woozy economy.

Contrast is again the order of the day on "1974, where Reid augments his percussive range to telling effect and, again, the work of Ward is that of a man entirely at home in this rarefied atmosphere. If there is a frustrating element in this one it lies in its brevity. A piece of this nature and of less than two minutes duration literally doesn't develop, which is a shame.

"The Entire State Of Florida redresses the balance, however, and with his solo on this one bassist Josh Abrams makes his presence felt in such a way that the listener might feel guilty for taking it for granted over previous tracks.

That said, once the components that the individual musicians bring to the proceedings fall into place, the repeated listening test is passed with flying colors. Each listen seems to bring new rewards, which makes this one something of a rarity in itself.