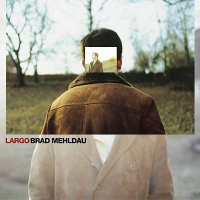 Brad Mehldau has had quite a load on his shoulders since he burst on the scene in 1994. He is the latest pianist—and perhaps the most fit—to wear the title "next Bill Evans." And in light of Mehldau's work with rhythm section Jorge Rossi and Larry Grenadier on the acclaimed Art of the Trio series, the comparison could be argued as valid.

But, all things must change, and on his latest studio album Largo, Mehldau abandons the trio format that has served him so well over the past 8 years. Mehldau teams with producer Jon Brion utilizing horns, different rhythm sections, and the studio format itself to create an interesting, moving, and for Mehldau, unusual record.

Brion used different microphone techniques to change the sound of the piano. Mehldau does much less "blowing" on this record and plays more songs. There is very much a conscious effort to evoke an emotional response from the listener by the "sound" of the record rather than the actual playing. In this respect, Largo is a refreshing break from so many other jazz albums that whizz by, solo after solo.

Mehldau combines inspiring originals and some unusual covers to keep the record interesting and grounded. The opening track "When It Rains," as well as "Dusty McNugget," feature particularly crisp and effective horn arrangements that serve as a pad for Mehldau to state and restate themes. Mehldau's take of Radiohead's "Paranoid Android," while a valiant effort and a fun listen, falls short of the original's intensity. On the other hand, his medley between Jobim's "Wave" and the Beatles' "Mother Nature's Son" is a success, as is a second Beatles cover on the album, "Dear Prudence."

Overall, this album is a must for Jazz fans that are interested in a break from the norm. Certainly an intriguing and gratifying listen, and one of the year's best albums so far.