By Kurt Gottschalk
May 7, 2008
Sign in to view read count 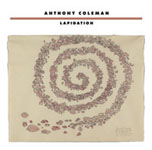 After a recording career given over in large part to shtick and nostalgia, the last few years have seen a well-deserved spike for Anthony Coleman. His last two records for Tzadik showed him (on 2006's Pushy Blueness) as a strong composer and (also 2006, Shmutisige Magnaen: Coleman Plays Geburtig) a remarkable interpreter. Lapidation continues the documentation of the pianist as a strong composer.

The five pieces included were written over the span of the last decade, ranging from a piano solo to horn-heavy tentet, but despite the span of time over which they were composed, they show a strong and coherent voice, coming together something like a suite rich with Schoenberg-ian swells and instrumental tensions. For the most part, Coleman appears only as a conductor here, leaving much of the piano (including the solo piece) to the more-than-capable Joseph Kubera. The ensemble pieces are given stately readings by a group including Downtown stalwarts Marty Ehrlich, Ned Rothenberg and Doug Wieselman (reeds), Kevin Norton and Jim Pugliese (percussion) and Ted Reichman (accordion), as well as some newer New Yorkers (guitarist Marco Cappelli and trombonist Christopher McIntyre).

Also worth noting for this presentation of Coleman-as-composer are the excellent liner notes by composer Lee Hyla. A recording of such dense riches only benefits from intelligent mapping and Hyla does a commendable job escorting the listener through the challenges and rewards Coleman has to offer.