By FRIEDRICH KUNZMANN
May 2, 2020
Sign in to view read count 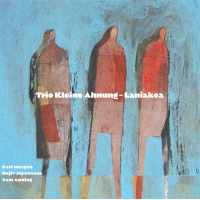 Berlin-based guitarist Carl Morgan gets together with his Australian compatriots Rajiv Jayaweera on drums and Sam Anning on bass for a date packed with Indie-rock infused compositions that live off of the trio's jazzy interplay and modern soundscapes. Between Morgan's modern guitar slurs and the rhythm section's minimalist approach to accompaniment, this record is imbued with a unique tone and finds the musicians in their own ethereal space.

In sound and vocabulary, Morgan's guitar playing on "Datameta" brings to mind the other Berlin-based guitarist, Kurt Rosenwinkel, especially upon soloing. Something about the reverb-and distortion-layered tone in combination with the jubilant groove in 4 strikes prominent reminiscence to the Rosenwinkel universe. But Morgan is no copycat (not that he wrote the title tune—it is credited to Anning) and the subsequent takes prove that the trio isn't out to sound like anyone but themselves. On "Kleine Ahnung" Sean Wayland guests on synth, adding atmospheric textures as well as a flashy solo to spacey changes that highlight the perceptive interplay between drums and bass. Like an organism, the two work in complete synchronicity with one another, increasing and decreasing pace or intermittently switching to a triplet- based rhythmic pattern seamlessly and as a unit.

Effortless chemistry is hard to come by, but very prominent between the three — especially impressive, considering that the music was created within no more than a week of jamming and recording in Berlin. Their respective homes being in Berlin, New York and Melbourne, the trio had limited time to rehearse and exchange ideas face-to-face. Even on quieter ballads their interaction rings with conviction. Arguably a slight nod to Bill Frisell, the title track's folk-rooted melody is introduced by minimalist chordal guitar strokes backing a warmly humming bass solo before the guitar takes over and solos through the entire second half of the tune. Indie rock qualities are on full display throughout the straightforward groove of "Ripples." Bass and drums define the verse's dotted rhythm with confidence, leaving the guitar to its own devices.

The blend of styles on Laniakea is colorful yet coherent, bound together by texture and the sonic tapestry which introduces and bookends the album as "Intro" and "Outro." Translated from German, the trio's name might allude to the trio having "little clue." But the music they make begs to differ, and showcases musicians who are well aware of their many strengths and play to them with aplomb.