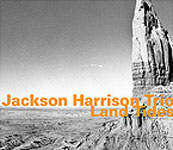 Australia is better-known for rock than it is for jazz, but Jackson Harrison might change that. The spirit of Bill Evans and Paul Bley runs through the young Aussie's compositions like two streams coming together to form a raging river. The Jackson Harrison Trio paints pictures of astonishing abstract art on its debut disc Land Tides, splashing fiery colors onto backgrounds that are often stark but always stunning.

If there is an Australian parallel to Harrison's music, it would be the early films of Peter Weir, who made the Outback both beautiful and alluring, even in the face of its inherent danger. There's a wild beauty to the disc that amplifies the trio's off-kilter approach. Natural process is a big subject with Harrison, as heard on the mercurial title track and the heartbreaking "Music To Forget. The former track is immersed in the ebb and flow of nature, and of life; the latter is a sober example of the grieving process, as Harrison shows that the past needs to be relived in order to get beyond it.

"Haven drops into this hollow, lonely place where nothing seems bright. Harrison deftly explores that loneliness while Dan Weiss' cymbals move the piece forward and Thomas Morgan's bass offers bare-bones counterpoint. "Kinski is powerful, jarring, complex and chaotic—everything you'd want in a study of the volatile actor whose fiery eyes burned right into the soul. It takes a cohesive unit to pull off a poem like this, and the Harrison Trio keeps the portrait real while keeping the piece on the tracks. With that cohesion is a fierce sense of mission and focus, which as strong on the pastoral "Dreamed Landscape as it is on the multi-shaded waltz "Rivers and Oceans and the ripping romp "Strafe.

Even though Weiss takes a lot of cues from Paul Motian's minimalist style, he is not content to simply be a ghost in the machine. Weiss' flash of chimes and shakers act like triggers on "Music To Forget, and his drumming on "Strafe adds a counterweight to Jackson's intense piano. Morgan's bass has a buzz and a dissonance that keeps the foundation a little bit skewed, increasing the twist in Harrison's intelligent compositions. There's an almost dizzying depth to Morgan's bass on the repeating figure that closes "Rivers and Oceans.

It's all about the painting for Harrison, who takes Evans' elegant approach through multiple levels of surrealism, showing wondrous scenes of life and nature on the way. The closer "Ajanta is the polar opposite of "Haven. There is light and renewal that didn't seem possible at the start of the disc, but the Harrison Trio shepherds us out of the desert and into the light. Jackson Harrison has great ideas and the talent to expand on them, but it's the undeniable chemistry he shares with his partners that makes Land Tides a complete picture.