BY FRIEDRICH KUNZMANN
June 18, 2019
Sign in to view read count 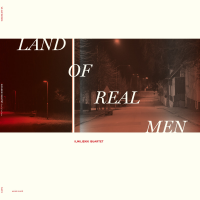 Finnish all-star combo Ilmiliekki Quartet creates its very own sonic landscape on the first recording in 13 years. Between minimalist percussive crescendi and nostalgic melodies led by Verneri Pohjola on trumpet, Land Of Real Men demonstrates an organic gathering of musicians at the top of their game.

Six of the eight tunes are originals by the bandmembers. the opener, however, is an explosive take on avant-garde artist Laurie Anderson's "O Superman" and gets the album going on a very intense note. Pianist Tuomo Prattala and bassist Antti Lotjonen interpret the meter and rhythm freely by multiplying staccato jabs at their instruments before trumpet and drums become more dominant and collectively push volume and melody to the maximum.

Follow-up "Singharat Soi 1" may be the structurally most straightforward and melodically most traditional cut on the album. It displays the quartet in a transparent acoustic setting that sees them increasingly growing together to a unit. Pohjola's characterful overblows combined with harmonically challenging piano solos are an ear-catcher.

The album continues down a path of the unexpected, never doing the same thing twice. "Afterimage" is a quietly haunting anthem filled with ambient scratches on cymbals and percussive piano play. Ironically, the composer himself, bassist Lötjönen, adds very little of his own playing but lets space and changes speak for themselves. After a funky jam in "Twisted Thistle" and a couple of more introspective exercises ("Il Maleki," "Ravelogue"), the title track brings driven rhythm back to the foreground, switching between muffled murmur and a full-on, head first climax. Piano and trumpet each get plenty of time to solo, which they use in a most subtle and empathetic way.

When it comes to covering a pop song in jazz it's not only the manner with which it is interpreted that can impress, but even the choice of song alone demonstrates vision and quality. Leslie feist's "Lonely Lonely" is not only executed with brilliance, but also a boldly fitting way to end the album.

Land Of Real Men is another winner coming from the young Finnish Label, We Jazz, and gives insight to some of the best music the country has to offer. Modern yet evidently studied in tradition, Ilmiliekki Quartet have crafted a wonderful record, and hopefully won't wait another 13 years to release the next one.