By EYAL HAREUVENI
July 7, 2014
Sign in to view read count 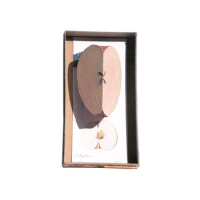 This ad-hoc French trio brings tenor saxophone players and free improvisers—Sylvain Guérineau, who is also a gifted painter, and Alexandra Grimal to the musical universe of veteran pianist Francois Tusques, who began to play jazz in post-war France and was a close associate of expatriate Americans like Don Cherry and Art Ensemble Of Chicago during the late 1960's. La Jungle du Douanier Rousseau—its title refers to the naïve paintings of post-impressionist Henri Rousseau—was recorded live and carries the exploratory spirit of the free jazz of the sixties.

The ten pieces unfold like a long suite and all are deeply rooted in the blues and jazz legacies but feature fresh, opinionated perspectives on these rich legacies. Tusques present the conventional, respectful angle while Grimal and Guérineau, each on different channel, share more subversive and abstract point of views on these legacies, yet, both, solidify Tusques soulful, emotional playing. Both Grimal and Guérineau adopt a reserved tone on the first pieces, unlike their highly original voices on their own recordings.

Only through mid-concert, beginning with the playful "Au Chat Qui Pêche" Grimal and Guérineau navigate the supportive and patient interplay towards less charted terrains. The "Don Cherry Blue," as the following pieces, especially the bluesy title piece, already sound as open-ended free improvisations that respects the intense, searching spirit of Cherry and other expatriate Americans of the sixties. The concert is concluded with "Move the Blues," a return to the heartfelt, respectful atmosphere of the beginning of the concert but with some Monkish ornamentations on the blues scale.

This impressive musical meeting demonstrates how the jazz legacy, as all modern genres, is enriched by fresh, irreverent and even subversive interpretation of its most basic vocabulary.