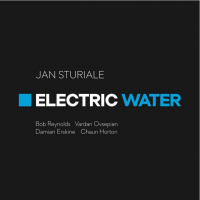 Jan Sturiale returned to the studio with a new quintet formation. Recorded at Tritone Studios, in Los Angeles, this is Sturiale's most international work, as much in the recording locations as in the musicians (and the featured vocalist) which shape his quintet. In this record, Electric Water (Drawtheline Records, 2014), he keeps developing his compositional language into a more accurate one.

Equilibrium is a term that better defines the final result of the nine tunes here that show the new musical stage of this Italian guitarist. Ballads like "Dark Grey" create a great space to explore the inner voice of each musician. This calm is not interrupted by faster rhythms as they don't break the atmosphere, instead they manage to maintain the comfortable texture through presto beats as in "Draw the line." So balance is, without doubt, the key principle in this album.

As in his previous record, Do not disturb the peace (Drawtheline Records, 2011), Jan Sturiale resorts to a crystalline voice to impress warmth in his compositions. This time, it's that of the Brazilian singer Tatiana Parra. Because of her, the quintet can be understood as a sextet considering that in the majority of her contributions here, Parra's voice functions as another instrument, moving in unison with the melodic lines of the guitar or the tenor saxophone. Although she is a Brazilian singer there is no musical fusion per se, but rather a kind of mood fusion which can be sensed in "Do sonho azul."

While Jan Sturiale has moved to a more contemporary jazz style, there is nevertheless still the presence of his rock background in tunes like "Echo," with a strong base provided by Chuan Horton's drums that combine with bassist Damian Erskine in opposition to the lyricism of Vardan Ovsepian on the piano.

Electric Water appeals because of its captivating simplicity, light but full of a sense of movement. There's a consistent energy irradiated especially by the convergence between the guitar and the tenor saxophone of Reynolds, a robust personality in this album. Everything fits naturally here, from the musical structures to the measured improvisations, allowing Jan Stuariale to be faithful to his musical purpose.