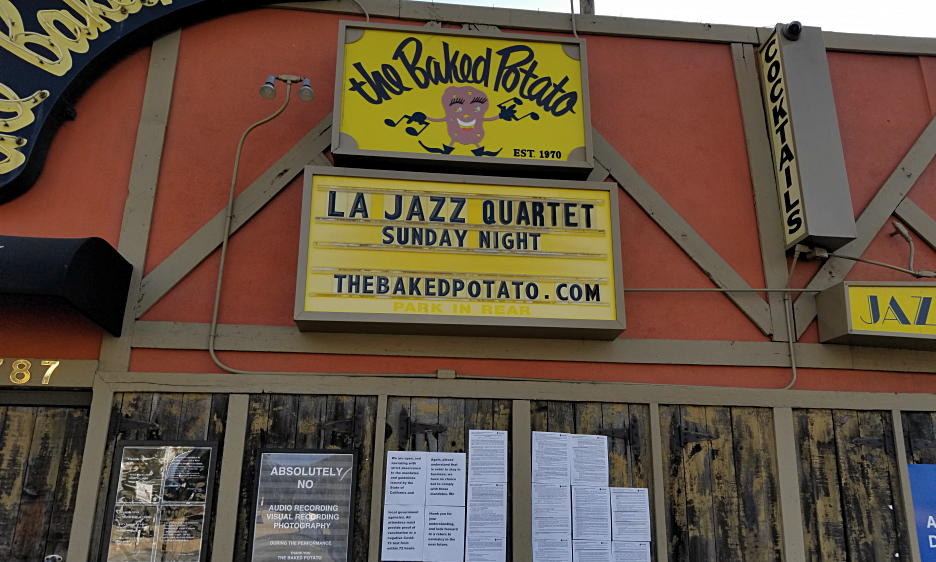 There is a symbiosis and a feeling of shared community that just elevates the experience for everybody involved. There are no boundaries, only a sense of permission to go where the music needs to go from moment to moment.
—Larry Koonse

The Baked Potato in Studio City (Los Angeles) is an iconic little jazz club that has been serving it up hot, both live music and scrumptious baked potatoes, for a half century now. The intimate space has played host to a long and impressive list of jazz elites. With a pre-pandemic capacity of not much more than seventy-five people, the BP recently reopened with a maximum of just twenty patrons inside! It amounts to a private show. For the record, the establishment has added an outdoor patio with big screen televisions, for others to be able to enjoy a show, dinner and/or cocktails.

Thirteen months without the feel good of live music left a void the size of the Hollywood Bowl. Certainly an experience none of us music lovers ever thought we would have to endure. Recently the Los Angeles Jazz Quartet took the stage at the Baked Potato to play before a capacity crowd of twenty friends and family members. To my good fortunate, bassist Darek Oleszkiewicz (also known as Darek Oles) included me amongst the brethren with an invitation to bask in an evening of communal share, warm hearts, and, oh yeah, live music. I must say, that it was a rush just seeing a jazz band up on the marquee again. The consummate acoustic bassist was joined by his longtime fellow upper echelon jazz cats, tenor saxophonist Chuck Manning, guitarist Larry Koonse, and drummer Jason Harnell. To have the live music drought end and be replenished in such an intimate and personal manner is part of what made for a very special evening. There was a heartfelt warmth and connectivity in the air that night. Everyone was listening intently to this most melodic and rhythmic quartet.

The set started with a Koonse original entitled "Blues for Albert." A song penned for the incredible bluesman Albert King? No, in this case the Albert is Einstein. Koonse later said that it is "sort of a quantum field take on the blues." It was also a perfect table setter. Its medium tempo allowed the four to each say hello, good evening, and welcome—voiced with their instruments of course. In discussing the songs, Harnell had the good humor to quip "It's about time someone wrote a blues for Einstein. Don't you think?"

The ensemble then moved on to serious business. A small drone was placed at center stage. The drone emphasized a specific Indian scale. The hum emanated from start to finish on an approximately twenty minute version of "Shadaj." While the hum became soothing, it was a great leveler and put people on the same page, before even one note was played. Manning and Oleszkiewicz delicately started to play amidst the hum. The many complexities of this Manning composition come forth as the full quartet hits its stride. The song was written as an adventure with plenty of freedom to go to unexpected places. Manning's full bodied mega solo led to another by Koonse. The freedom in structure led to opportunities for Oleszkiewicz to stretch and to get wonderfully gritty. He engaged the mostly ruboto feel as he maneuvered the space to get his bandmates in the best possible positions. Harnell successfully played a variety of rhythms, while driving the band forward and through the many changes.

The two originals were followed with their take on a Miles Davis classic. The quartet added their own harmonic twist to "All Blues." The very familiar tune has been played in a multitude of styles and lends itself to many arranging concepts. On this night, a straight forward arrangement proved wise as the tune became a burner in which all four musicians lit up. While stretching out individually an intelligent conversation was shared by a unit that succeeds brilliantly in being four equal parts.

A change of pace was in order as Oleszkiewicz went into his composition "Embarcadero." The tune brought weight and purpose to the directional compass, as Oleszkiewicz dedicated the song to a longtime friend who recently passed away. Isla Eckinger was a bassist, trombonist, vibraphonist, and composer. They played a lot together back in the 1990's. Born in Switzerland, Eckinger had long lived in Los Angeles. Oleszkiewicz remembered Eckinger saying, "He was a great spirit, really nice guy, and such a special , pure jazz musician." The gorgeous bolero also had the feel of a slow rhumba. The warmth and emotion already in place was taken to another level,

The sound and feel of disappointment appeared when it was announced that they were about to play their last song, Time flies when you are having fun. Any dismay was quickly erased when in the next breath it was stated that the last song was to be a Thelonious Monk romp, entitled "Think of One." The quartet put its own swinging arrangement on it and indeed romped through it with delight. Manning and Koonse finished strong with powerfully intricate soloing, while Harnell and Oleszkiewicz dug into deep grooves, collectively bringing a fury to the set's conclusion.

Any signs of rust from over a year of not playing live together was not apparent. Instead, it was more like they just picked up where they left off. Koonse later spoke eloquently in saying that "the sense of support I feel with my musical comrades in this band never fails to guide me to make the correct in the moment musical choices opposed to what might be perceived as impressive. There are no boundaries, only a sense of permission to go where the music needs to go from moment to moment." He added that, "There is a symbiosis and a feeling of shared community that just elevates the experience for everybody involved." "Yeah, the band is pretty special," Manning commented in agreement, "It's all about the individuals and the relationships."

For just one night, we were all allowed to put the pandemic and other issues one may have, aside and enjoy ourselves. Koonse, Manning, Harnell, and Oleszkiewicz were as strong personally as they were on stage. A night of hearing live music again, after such a long period, just had to be special. Thanks to the LA Jazz Quartet and a genuine group of people, which includes the great staff at the Baked Potato, it was that and then some.