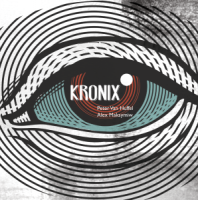 Hailing from Canada, but now calling Berlin home base, saxophonist Peter Van Huffel and guitarist Alex Maksymiw (Marcus Strickland) are radiant stars in the progressive jazz universe. As a solo artist, Van Huffel's Gorilla Mask band and similar undertakings have been wowing jazz audiences with a high-impact and kinetic modus operandi. And Maksymiw's Without a Word (Double Moon, 2015) features formidable saxophonist Marcus Strickland and is a program devised on the guitarist's perceptive compositional approach, tasteful riffs, strong soloing and ability to say more with less.

Diversity is a strategic factor here. For example, on "Excerpt Two" the duo generates an ethereal soundscape, aided by Van Huffel's echo-infused and dreamy lines amid Maksymiw's easy-going gait, but they follow-up with a modern mainstream flow on "Slow Burn," sculpted by the guitarist's walking chord phrasings and the saxophonist's linear movements. Yet the plot thickens with "Anyhow," as the musicians work through a free-form groove, amped by Maksymiw's distortion-tinged notes, leading to complex odd-metered unison choruses and a rapid-fire attack.

The artists meld tricky time signatures with mind-bending segments via spot on accuracy and great depth. They also delve into some experimentation on "Happenstance," where Van Huffel's echoing and breathy notes buoyantly ride atop Maksymiw's chop chords with a gently swirling backdrop, casting notions of time standing still. And they close it out with a contrasting free-jazz alternate take on "Anyhow" during "Anyhow / Alternate Take." It's irrefutably obvious that the musicians' lengthy musical association and like-minded goals yield numerous rewards throughout this stirring encounter.