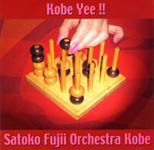 Another in a fine series of big band albums that pianist Satoko Fujii has released, Kobe Yee!! features the ensemble that she works with when she's in town. Kobe, Japan, that is.

This fifteen-piece band interprets her music with a fierce attitude, as each selection comes laden with the force of collective power. On "Tobifudo we're treated to her percussive piano fortitude as she releases a ton of energy into its introduction, inspiring the rest of the band immediately. Trombonist Tommy Taniguchi, in particular, steps up and clears the air with his featured solo, inviting the rest of the band into a chorus of passionate cries. An exciting wordless vocal drives the piece to its conclusion with the anxiety of an organization on fire.

Fire moves with an eerie texture that catches hold of the evening's spirit and lays it all out with trepidation. Fujii's "The Future of the Past, on the other hand, offers changes in mood that allow her suite-like panorama to move through phases both dreamy and intense. The band's group conceptualization creates tension, as do the soloists in turn. No one holds back throughout this stirring piece.

The album's title track, "Kobe Yee!!, features a lovely tango texture that wafts romantic and fragrant. This band loves to pump it up though, and to overpower any and all in its wake. At about one-third of the way into this piece, Fujii signals a change from the piano and the mood shifts quickly from pungent action to a rolling scene where Nature provides calmer waters. The band's soloists enjoy speaking up with harsh banter, clearing the air emotionally, while the ensemble continues to pursue the complex harmonies that the composer has designed.

Trumpeter Natsuki Tamura wrote "Shikaku, which throws the band into a tantrum, alternating between quiet space and anxious adventure. The theme appears as a calming thread woven among free jazz outbursts and sudden changes in demeanor.

Sola closes the program with as much intense fire as the rest of the session. Here, the band starts out slow with plenty of space, as alto saxophone goes it alone on an awakening journey that gathers momentum measure by measure. Gradually, the others all enter and add their voices to the mix. It turns into the most beautiful piece of the program, allowing for lyrical refrains along the way. Another suite-like composition, this one sees its mood change several times. Fujii closes it off with a beautiful theme that broadcasts consonant harmony to the world along with adventurous asides. Her leadership, piano, and compositions give this band clear sailing for this highly recommend performance.

Fire; Tobifudo; The Future of the Past; Kobe Yee!!; Shikaku; Sola.