By BRUCE LINDSAY
January 22, 2017
Sign in to view read count 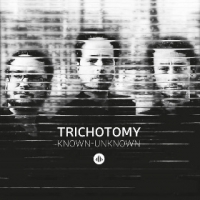 It's been a while, four years to be precise, but Australian piano trio Trichotomy is back. Known-Unknown appears after a break during which the band's members have been busy with numerous other projects and sees the first appearance of a new bassist, but it takes just a few bars of "Five" to reassure fans that this cohesive, exciting trio is back and on track.

Pianist Sean Foran and drummer John Parker are joined by bassist Samuel Vincent and all three musicians contribute compositions—Foran getting the lion's share of writing credits with six tunes. On the band's previous release, Fact Finding Mission (Naim Label, 2013), the trio was augmented by various guest musicians. Known-Unknown eschews this approach, returning to the core trio with no additional players.

All three band members are credited with electronics, used live to alter the acoustic instruments and hence to expand the tonal variation in the music. Such alteration is subtly done, on the hypnotic "Reverie Of Lack" for example.

Foran's "Five" opens proceedings in a fairly straight-ahead style, the trio establishing a muscularity in its playing before calming things down somewhat. It's a fine example of the band's sense of dynamics and drama. "Cells," by Parker, has more of a narrative feel: a melancholy story courtesy of melodic opening and closing passages that bookend some group improvisation. "Past Tense" is Vincent's first composition for the trio and features his mournful arco bass. On this evidence, the new member will further strengthen the band's writing abilities.

Trichotomy's powerful, muscular, playing style is again in evidence on "Asset Or Liability"—especially Parker's drums and percussion. "It's Strange Coming Back" is another Parker number, its title perhaps a nod to the band's extended absence. It's another showcase for the quieter and more reflective side of things and the album's prettiest tune. The repetitive "Semi-Quasars" hangs around a little too long but with "Hemmingways" Known-Unknown closes on a fluid and upbeat tone.