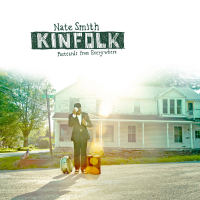 To get right to it, rarely does a first effort as leader come along that is so worthy of attention. With Postcards From Everywhere, Nate Smith has offered a many-faceted jewel whose luster only grows with re-examination.

On one level, this is indeed an album that satisfies the requisite expectations for a debut from a drummer of Smith's caliber. It has tunes covering a wide range of influences, great grooves in both straight and unusual meters, and of course great drumming throughout, but to characterize this as "a drummer's album" would be a huge disservice. It is most definitely a showcase for Smith's other enviable skills as well.

As a bandleader, Smith has shrewdly surrounded himself with a healthy roster of well-known guests (Chris Potter, Lionel Loueke, Dave Holland, Adam Rogers, Gretchen Parlato), all of whom make solid contributions. He has also built a core group that includes some lesser-known (but no less talented) names that supply many of the most notable moments on the album. The performances given here by pianist Kris Bowers, saxman Jaleel Shaw, guitarist Jeremy Most and vocalist Amma Whatt all plead for further investigation. Perhaps though, his wisest choice as leader was pairing up with (Lost Tribe, Screaming Headless Torsos) bassist Fima Ephron, whose unadulterated yet innovative feel here is magnified by the obvious chemistry he has with Smith.

As a composer, Smith,(who wrote or co-wrote all but one tune included here), covers a lot of stylistic ground, showing an honest breadth of musical love and appreciation that ties it all together. The (so-groovy-you-don't-know-it's-17/8) Funk / Fusion of "Skip Step," the Hip-Bop "swunk" of "Bounce," the dreamy, lyrical pop of "Disenchantment: The Weight," and the straight jazz sound of "Spinning Down" all cohabitate quite nicely. Occasionally the juxtapositions are within the same pieces. The vocally-oriented songs "Pages" and "Morning and Allison" also contain some of the most satisfying jazz soloing on the album.

Arguably, the most impressive of Smith's talents on display may be that of producer. He is no stranger to that role, having numerous recordings to his credit and his experience is evident here. From subtle touches, like the use of vocalist Michael Mayo to under-shadow melody lines and create chordal pads and effects, to the use of familial spoken-word / sound collages to at once unify disparate stylistic choices and validate the album's conceptual title, Smith shows he knows how to augment without overproducing. He also cannily walks a fine line in his presentation of the album closer, "Home Free (for Peter Joe). With it's string arrangement and unabashed emotion, it's the pure, heartfelt honesty of Smith's treatment that keeps it feeling beautifully sweet without turning into mush.

Perhaps Smith's biggest triumph, though, is in thoroughly fulfilling his self-described mission to keep things as elemental as possible. This is often expressed in brevity -(as in the tortuously short burn of "From Here: Interlude" or the only-as-long-as-it-needs-to-be "Skip Step") -and in the simple foundations from which the songs were built -( see the gorgeous "Retold" and the skeletal funk of "Small Moves Interlude"). Like a chef who makes reductions to maximize flavor, Smith's economy has amplified the album's directness and gets right to the essence of the music. The fact that he has done so without it ever feeling like the abundance of talent present was underutilized is nothing short of remarkable.

If the title Postcards From Everywhere is a good metaphor for the far-ranging musical styles, travels and experiences Nate Smith has drawn from to make this album, then the naming of the project Kinfolk goes a long way to describe the emotional heart of this music.

And if anything is evident here, it's that Nate Smith has A LOT of heart.