By DOUG COLLETTE
March 1, 2009
Sign in to view read count 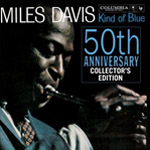 Even as the period photos of Miles Davis and co., taken in the studio and on the stage around the time of Kind of Blue (Columbia, 1959), place the music of this Legacy Edition squarely in its time, two excellent sets of liner notes alternately expound upon and contemplate the ongoing influence of this hallmark album, now fifty years old.

If the merchandising created last year (a package with DVD, LP and book etc) to celebrate the half-century landmark begs the questions of how many versions anyone needs of a given album, even one as profoundly innovative and roundly celebrated as this, each subsequent revisiting of the 1959 launch of modal composition and improvisation reveals more nuance than ever. And not just in the increasingly clear remastered sound allowed by the progression of technology that allows being so deeply immersed in the sound itself.

In this two-CD edition, archetypal for such expanded packages in collecting recordings surrounding the time of the main objet d'art, the revelation arises from studio recordings cut prior to the main sessions for Kind of Blue itself. Populating the bulk of the second disc, two versions of "Fran Dance" and "Love For Sale" indicate how Davis was beginning to turn in a new direction at least a year prior to the historic sessions.

Even as each of Miles Davis' monumental work—The Birth of the Cool (Blue Note, 1949), In A Silent Way (Columbia, 1969) and Bitches Brew (Columbia, 1969)—sound like the perfect execution and complete distillation of its concept, this Legacy Edition thus suggests the continuity of the man with the horn's creative impulse. Davis' perpetual drive to innovate has its own forward momentum, much like the extended live version of "So What" that concludes this double package of discs. He neither rested on his laurels nor allowed himself to merely replicate his ever-so-fine ideas.

It was left to the cultural cognoscenti of the times and the jazz community at large to draw further inspiration from the symbiosis of the great quintet that appears on Kind of Blue. That the deceptive simplicity of its compositions contrasted the detail of the improvisations is the source of its depth and ultimately the reason it remains, perhaps even still ascends, within the pantheon of the defining art of the times.

Continued listening to "Blue in Green" and "All Blues" recalls how fascinating the work of Miles Davis is—even if not all that work, progressive though it may be, constitutes an aesthetic flashpoint like Kind of Blue, one so illuminating that it allows the past and the future to be seen and heard simultaneously.