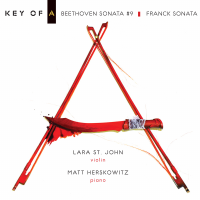 It is always a worthy question to ask when a pairing like Beethoven's notorious "Kreutzer" sonata with Franck's frankly demonic violin sonata, not to mention the inspired inclusion of Kreisler's "Schön Rosmarin," thrown in for giggles, is released. There is clever reasoning to programming both sonatas on the same disc and it is not simply that they were both composed in the key of A Major (though one could argue that the Beethoven orbits closer to A minor). There is also a bit of clever bait-and-switch going on when the pairing question takes precedence over the one that asks, "Do we need one more recording of the 'Kreutzer'?" Key of A is a deep one, a program thoughtfully considered, composed, and conducted. There is the element of firebrand in the entire project. That sounds like violinist and empresario Lara St. John.

St. John made a considerable splash in the mid-1990s with her Bach, selections first, eventually evolving to her Bach -Six Sonatas & Partitas for Violin Solo (Ancalagon, 2007). Sparkling quicksilver, that is what these performances are. But St. John declined to rest on her laurels or to record anything like an exhaustive reading of Bach's violin corpus. She wisely cherry picked her projects (one of the good things about owning one's own label) including such imaginative projects like Hindson, Corigliano, Liszt/Kennedy/St. John (Ancalagon, 2008); Vivaldi: The Four Seasons / Piazzolla: The Four Seasons Of Buenos Aires (Ancalagon, 2009); and Bach Sonatas (Ancalagon, 2012), these latter recorded with harpist Marie-Pierre Langlamet. And, these do not even mention her Polkastra projects, Apolkalypse Now (Ancalagon, 2009) and Polkastra: "I Do" The Wedding Album (Ancalagon, 2013).

But St. John is not the only intellectual instigator here. No. Pianist Matt Herskowitz is her equal partner, uniformly culpable for Key of A. Like St. John, Herskowitz is conservatory trained with ample chops in all music genres. The pianist has made some notable recordings including his most recent recordings, Mirror Image (Justin Time Records, 2020) and Matt Herskowitz Plays George Gershwin (Self Produced, 2019). In any given release, Herskowitz is as likely to combine an Erik Satie Gnossienne with Louis Moreau Gottschalk's "The Last Hope" as he did on Mirror Image. A serious musician with a sense of humor, Herskowitz is both synergistic and catalytic when combined with St. John and the results are electric, as can heard on the eclectic collection of music of the Eastern European Jewish Diaspora Shiksa (Ancalagon, 2015).

The history pushing Beethoven's Kreutzer is not so much compelling as it is downright crazy. Beethoven originally inscribed the sonata for the Polish-born African-European virtuoso George Bridgetower, who gave the premiere, sight reading, on May 24, 1803. The performance went well and was received with accolades, but following the performance over drinks, the violinist apparently questioned the virtue of a young lady of whom Beethoven was quite fond. Deeply unhappy, Beethoven dedicated the piece to French violinist Rodolphe Kreutzer, who was considered one of the finest violinists of his day. However, Kreutzer refused to perform the piece, having none of it, saying the composition was, "outrageously unintelligible." In spite of all, the dedication remained, naming the sonata forever.

Beginning gently, St. John and Herskowitz set up the opening movement as a pastoral only to abandon the country for a fast-paced and assertive cadenza that dope slaps the back of your head, dragging you behind it, at an obscene rhythm and speed. While barely left intact, the second movement is intended to soothe, its variations subtle but hewn with a bit of rough trade, keeping you honest. The concluding presto recalls the oath made by the first movement: to surprise, delight, and exhaust, all in the same breath.

If Beethoven's sonata still sported a whiff of the classical, Cesar Franck's equivalent is romanticism in full bloom. Its genesis lacked the drama of Beethoven's, being quietly conceived as a wedding present for the composer's close friend, violinist Eugène Ysaÿe, performed by him before the ceremony. The Franck, all four movements: slow, fast, slow, fast, is a cinematic sprint through romantic mist, the temperature increasing. As fine as is St. John, it is Herskowitz who does the devil's heavy lifting, articulating Franck's frantic piano sections with stealth and percision.

The Beethoven and Franck sonatas often find themselves on the same release, notably: Itzhak Perlman's 1998 Saratoga performance with pianist Martha Martha Argerich (Warner Classics) and Daishin Kashimoto's performance with pianist Itamar Golan (Sony Classical, 2004). Here St. John's fire and Herskowitz's pure pianism open the works up like a drop of water to a rare highland scotch. Pungent, sassy, outspoken, and confident, their Beethoven and Franck should update the catalog nicely.