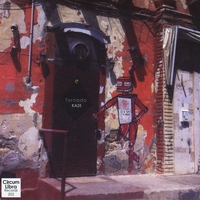 With Tornado, pianist Satoko Fujii and trumpeter Natsuki Tamura may get you shaking your head in wonderment. Firstly, the convergence of metaphors inherent in the album title, the name of the band (kaze means "wind" in Japanese), and the fact it features two trumpeters is enough to bring a smile to anyone's face. More heartening is the rapidity with which Kaze, a quartet with trumpeter Christian Pruvost and percussionist Peter Orins, has emerged from the couple's myriad side projects into a tightly integrated and artistically fecund unit with a distinct sound and purpose. Like Fujii's late, lamented quartet Ma-Do, Kaze is comprised of little- known musicians with unique capabilities. Pruvost and Orins are part of the Lille (France)-based arts collective Muzzix, a partnership of experimental musicians of all stripes—jazz, rock, and classical—who collaborate on each others' projects and assist one other with concert and recording production.

It's almost fitting, then, that Orins is at the forefront of a growing trend away from the race-around-the-kit style of free-jazz traps bashing. If anything, his comparatively economical playing is more informed by the work of contemporary art-rock drummers such as Greg Saunier. Orins' role in the group is similar to Fujii's; as an organizational and orchestral force. The pairing of veteran Tamura with the up-and-coming Pruvost is a joy to behold. Both are blessed with jaw-dropping technical abilities, as well as a seemingly endless desire to experiment and take musical risks. The risk factor comes into play quite frequently throughout Tornado. Simply put, this album is an avant-garde trumpet fan's dream-come-true. Both Tamura and Pruvost control an endless array of extended techniques, and the sounds they can command at any given moment are as breathtaking as they are confounding. Yet some of the most profound and spine-tingling moments on Tornado come when both trumpeters are playing very simply and conventionally, as during the opening sections of "Tamura's "Wao" and Fujii's almost 20 minute-long opus "Triangle."

There's a lot going on in each one of Tornado's five tracks. Orins' two contributions "Mechanique" and "Imokidesu" actually stand quite apart from the rest of the album. The former features subdued intertwining trumpet lines, almost in a Lee Konitz / Warne Marsh style, over minimal percussion and piano. The latter starts off similarly but with Fujii's forlorn, almost doom-laden, piano chords forming the framework of a piano-drums dialogue that builds to a furious climax topped by a militaristic trumpet melody. The trumpet duet that highlights Tamura's "Wao" covers a startlingly vast swath of stylistic ground—everything from lovely harmonies to flatulent blats and alien bird-like sounds—before launching into an absolutely crushing group improvisation. Fujii's two pieces make up the bulk of Tornado. The title track unfolds like an old fable, inexorably progressing from a pastoral scene towards the whirling chaos of its namesake. In the middle, a trademark Fujii melody in 5/4 time that opens the door for yet another trumpet dialogue—this time supported by Fujii's masterful prepared piano. "Triangle" is truly epic in scope. A multi-sectioned piece, it goes pretty much everywhere; breaking the quartet down into a series of trios, duos and solo while accomplishing Fujii's over-arching compositional imperatives.

Coming on the heels of Ma-Do's Time Stands Still (Not Two Records, 2013), a thoroughly amazing and defining artistic statement if there ever was one, Tornado stands as further evidence that Fujii and Tamura are unparalleled as players, composers and musical conceptualists. By continually inviting new musicians into their inner circle, they only strengthen their own capabilities.