By Pascal-Denis Lussier
October 30, 2010
Sign in to view read count 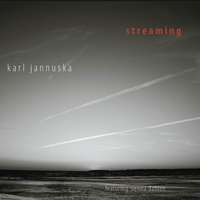 Studies demonstrate that everyone pays more attention to a female voice—the more alluring, the better the attention—and this, regardless of gender. Singer Sienna Dahlen has an extremely alluring voice, one that could sell rainwater in a snowstorm. This may be partially responsible for Streaming's extreme attractiveness and its ability to garner attention even from those who tend to shy away from vocals. However, "partially" is the key word; it's merely one ingredient in the sweet, delicious, light-but-filling folk-pop/jazz-blues fare that drummer Karl Jannuska serves up in Streaming, his third album as bandleader, and his first to feature a singer.

This album of original Jannuska compositions goes down like refreshing lemonade on a sultry summer day or comforting hot chocolate on a crisp cold winter night; it's a wonderful dish to be savored slowly and attentively, appreciating its full flavor, or distractedly, while enjoying the surroundings. Nourishment made the good ol' carefully- prepared way; nothing fast or junk about it—this is a great, wholesome, feel-good album.

Manitoba born and raised, Montreal/New York schooled and, now Paris based, Jannuska has the ability to absorb and assimilate his environment while never losing track of himself. His compositions reflect a folksy, western- tinged form and an east coast urbanism with a French buoyancy. It's tightly structured, but the result rises above all, breathes and liberates a pleasant, minimalist airiness. Streaming isn't a demanding album—it's as accessible as jazz can be—but the melodies enchant, and the orchestration and playing offer plenty more to enjoy, making the result far from being merely pleasant ambiant or background music.

The tunes on Streaming wouldn't necessarily hold up without Dahlen's voice, but that's the way the album was conceived. The lyrics weren't slapped on; clearly, the compositions were written with Dahlen's soft and bluesy, resonant yet intimate Sara K./Cassandra Wilson-style voice in mind. The lyrics on six of the tracks were written by Jannuska, while Dahlen penned three, and they co-wrote one.

Jannuska limits the register range on the saxophone's smooth phrasings and on the clear, rounded guitar notes, weaving all parts interchangeably and sparingly, marrying plush timbres to Dahlen's voice to give the album a soft, multi-layered feel. From the opening, march-like "As Far As The I Can See" through to the catchy rolling groove of "Gold Star," the atmospheric, loopy title track, the hopeful, personal ballad, "A Whiter Christmas," and the soulful closer, "Silent Jubilee," the album flows seamlessly and effortlessly.

True, Jannuska sets firm boundaries for his musicians, and his melodic structures don't offer much room for solos, but, whether with his Paris or Montreal band—the album was recorded in both cities—Jannuska surrounds himself with highly-talented musicians who manage to use that limited space in subtle and appealing ways; players who communicate the satisfaction that comes from doing what they love at such a high level, and with good friends.

The album, Jannuska's first as a leader on the Paris-based Paris Jazz Underground label that he helped establish, has a terrific sound, one reminiscent of that much touted ECM aesthetic; even the minimalist, barren landscape cover art is, intentionally or not, evocative of the label.

Streaming is far less playful and world-inspired than Jannuska's previous disc, Thinking in Colours (Effendi/Crystal Records, 2008). Instead, it's a more sober, more reflective album—but neither is it a new side to Jannuska. It's Jannuska succeeding, yet again, finding his true form in a slightly different manner.


Tracks: As Far as the I Can See; Nothingness; Sundogs; Gold Star; Streaming; Timbuktu; A Whiter Christmas; Snow in May; Bittersweet; Silent Jubilee.

As Far as the I Can See; Nothingness; Sundogs; Gold Star; Streaming; Timbuktu; A Whiter Christmas; Snow in May; Bittersweet; Silent Jubilee.