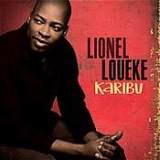 Guitarist/singer Lionel Loueke's remarkable odyssey from the West African nation of Benin to the apex of the jazz world is quickly becoming the stuff of legend. After hearing a George Benson CD as a teenager, Loueke became enamored with American jazz and began traversing the globe to further his musical education, first in the neighboring Ivory Coast, then in Paris and Boston, studying at Berklee, and finally in Los Angeles, where his audition at the Thelonious Monk Institute had the likes of Herbie Hancock, Wayne Shorter and Terence Blanchard standing and cheering. He's since toured and recorded with both Blanchard and Hancock (he's featured on Hancock's Grammy-winning River: The Joni Letters (Verve, 2007), released two solo albums and has made a knockout of a major label debut on Blue Note.

The 34 year-old Loueke's sound reflects his globetrotting history; his exceptional guitar playing and gentle vocals seamlessly blend advanced jazz technique with traditional African influences, the AfroPop of Fela Kuti and King Sunny Ade and a healthy dose of Brazilian samba. It's an intoxicating mix that impresses for its originality, imagination and beauty, as well as its imposing musicianship.

On the album's title cut, for example, Loueke (ably backed by his longtime trio mates Massimo Biolcati on bass and Ferenc Nemeth on drums) lays down an intricate, oddly-metered guitar groove while singing in unison (á la Benson) and providing rhythmic tongue clicks. He also has no problem holding his own with Hancock and Shorter, who sit in for two tunes apiece and are featured together on the exploratory "Light Dark" (only the second time the two have appeared together as sidemen for the label since the 1967 Lee Morgan album, The Procrastinator). Other highlights include a breezy take on Hoagy Carmichael's "Skylark" and a gorgeous version of Coltrane's "Naima," with a soaring soprano sax contribution from Shorter. The album closes on a festive note with the danceable African melody "Nonvignon," a spirited end to a memorable recording filled with promise.