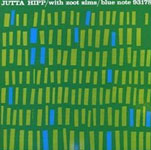 Jutta Hipp proves one of the more curious tales in a music whose history is full of curiosities: She grew up studying jazz piano and painting in her native Germany, then moved to New York City in late 1955. She played piano in and around the city for about a year, including performances documented on two 1956 live albums released by Blue Note.

Jutta with Zoot was recorded later in '56 and produced by Blue Note founder Alfred Lion with a cast of veteran sidemen including saxophonist Sims, who Hipp had met a few years earlier while Sims toured Europe as a member of the Stan Kenton Orchestra. To fill out the classic bop quintet—two horns (trumpet and sax) with a piano/bass/drum rhythm section—Hipp brought in Ed Thigpen, the drummer from her trio, and Sims brought the trumpet player and bassist from his own Quintet.

Sims contributed the opening "Just Blues," although he apparently couldn't be bothered to title it. Trumpeter Jerry Lloyd sounds well-schooled in bop and post-bop trumpet, and Hipp briskly steps out in her solo spotlight, but Zoot sounds like the star, especially when his closing phrases coalesce on the beat then rides like a seasoned jockey through the finishing kick. "Violets for Your Furs" sounds custom-written for Sims' satin-glove ballad style, with the pianist's delicate and thoughtful touch quite complementary to the saxophonist's sensual sound. So does "Almost Like Being in Love," with which Sims dances like a courtly gentleman.

Jutta with Zoot jumps and wails too. Bop solos by Sims, Lloyd, and Hipp lead the ensemble in highstep through Lloyd's propulsive "Down Home," swinging jazz well-played and hot. Zoot even cops from "When the Saints Go Marching In" to introduce "Wee Dot," a New Orleans feeling later lent by Lloyd's trumpet spotlight. Although it's often written how much she plays like Horace Silver, in both these tunes Hipp brings it hard and hot, like the subtle but funky thunder of Wynton Kelly.

And in "These Foolish Things," best suited for when your lights are low and your mood soft and cool, Hipp's thoughtful, beautiful and articulate playing proves worthy of commanding such a classic Gershwin tune.

Soon hereafter, Hipp dropped out of the music business and retired to her Queens apartment, where she quietly lived as a seamstress and painter until her 2003 passing.

Just Blues; Violets for Your Furs; Down Home; Almost Like Being in Love; Wee Dot; Too Close for Comfort; These Foolish Things; 'S Wonderful.