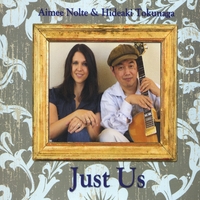 This genial album by singer/pianist Aimee Nolte and guitarist Hideaki Tokunaga consists of eleven original compositions, all of them written or co-written by Nolte. While there are snippets of jazz from time to time, they are more peripheral than essential. The spotlight is most often on Nolte's voice, which is clear and steady but otherwise unexceptional.

As these are accomplished musicians, the session glides smoothly along with no apparent lapses. Having said that, what disconcerts most are the lyrics, which are rather far removed from the Great American Songbook. It's not elevator music; much better than that. On the other hand, it seems most suitable for light or smooth jazz media outlets.

Nolte scats and plays some tasteful piano, while Tokunaga does what he can to sustain interest and excitement within the album's narrow framework. Although none of the songs is memorable, they are by and large charming and good-natured, which is more than can be said about much of today's pop/jazz themes. While there's not much here to inspire hard-core jazz fans, as a vocal album Just Us is perceptibly above the norm.