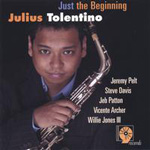 Bolder claims have been made than the one alto saxophonist Julius Tolentino makes in the title of his debut CD as leader, and on more than one occasion by musicians without the chops to back them up. That isn't the case here. At a baby-faced thirty years of age, surrounded by a group of veteran and rising talents such as trombonist Steve Davis and trumpeter Jeremy Pelt, Tolentino has recorded a fine album of appealing hard bop that is testament his own compositional skill, as well as an homage to influences like Jackie McLean. Of nine total tracks, three are his own (the proclamatory title track; the tribute to his wife, "Shell Joy;" and the Illinois Jacquet tribute "Letter to Illinois"), one is Davis' ("High Drama"), and one other is Pelt's ("Pharoah's Curse"), leaving four standards for the group to shape according to its own approach.

In an instrumental category seemingly dominated by tenor players, Tolentino plays with a bell-clear, muscular sound, though it still remains remarkably lithe. This is in evidence from the beginning of this beginning, so to speak, on the rolling, dashing, darting opening number. Pelt and Davis sit this one out, reducing the group to a quartet and thereby turning this track into something of a vehicle for Tolentino to showcase his swing and mettle. With a solo each for Tolentino and Patton, the four players cram in a multitude of effortless tempo changes while working from a fairly common twelve-bar template. Benny Golson's "Domingo" gets a colorful, fiercely cohesive treatment from the full sextet. The segue from Tolentino to Pelt is so seamless that it seems as if his alto sax has magically morphed into a trumpet.

Tolentino shifts into a lyrical and tender mood for the upbeat Eckstein ballad "I Want to Talk About You," demonstrating a range suited to a musical phrasing that tips between the poetic and the colloquial. This is another quartet number, and the solos are again split between Tolentino and pianist Jeb Patton. To my ear it begs for a solo from otherwise laconic bassist Vicente Archer, which unfortunately doesn't come. Pelt's rather brief "Pharoah's Curse"—a swinging, almost showbiz tune—follows, with all-too-pithy solos from the brass and piano. Again, Archer and drummer Willie Jones III are inexplicably passed over when their contributions might have embellished the song significantly.

"High Drama" by Davis is the disc's most intricate and least rigidly unified chart. It certainly merits its title, with Tolentino and Pelt hovering quite a bit in the upper register and a subdued Davis (whose solo falls between them) working as a foil. Here Jones does take a skittish solo to match the rumble and splash of his timekeeping, although Patton's monotonous vamp doesn't enhance it a great deal. The ultra-traditional ballad "Letter to Illinois" speaks to Tolentino's years spent in the Illinois Jacquet Big Band with the big band's instrumental inverse, an alto sax/piano duo, closing out this beginning as strongly as it began.

Just the Beginning; Domingo; I Want to Talk About You; Pharaoh's Curse; High Drama; Quadrangle; Shell Joy; Make Someone Happy; Letter to Illinois.