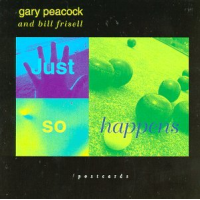 In the early 90’s, the folks at “Postcards” consistently produced some of the finest jazz recordings to hit the stores while featuring artists such as Alan Pasqua, Reggie Workman and here, the teaming of guitarist Bill Frisell and bassist Gary Peacock. Thankfully, Arkadia records have taken ownership of the catalogue and from all appearances, retain the original artwork and packaging.

The pairing of Bill Frisell and Gary Peacock is sheer delight as their respective careers in jazz and beyond are well documented. Peacock’s deep, resonant wooden tone along with Frisell’s at times cosmic inventions work extremely well in this setting. Pieces such as “Only Now” and “In Walked Po” are engaging forays into inventive dialogue, brief jagged statements and clever articulations. The duo often sound as if they were putting a jigsaw puzzle together from scratch! Their rendition of the American classic “Home On The Range” is often bluesy in scope yet with Frisell’s astonishing technique and gregarious phrasing, – the tune evolves into an ethereal dreamscape. On “Reciprocity” Peacock displays his commanding presence as Frisell’s weaving tapestries of tonal colors offer elegance and contrasts well with Peacock’s deft single note statements. Frisell picks up the acoustic guitar on the laid back “Good Morning Heartache” while vivid imagery prevails on “Just So Happens”. Throughout, Frisell and Peacock lay it on the line via simple elegance, finesse and improvisation of the highest order although most if these compositions are structured yet maintain a relaxed and loose vibe. Recommended - * * * 1/2

All of the “Postcards” releases feature audiophile sound quality as Arkadia looks to continue the tradition with new releases and back catalog reissues such as Just So Happens and others. For additional information you can check the Arkadia web page at www.arkadiarecords.com