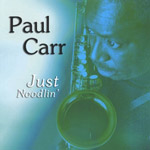 Saxophonist Paul Carr is far too modest. If he's Just Noodlin', I'd love to hear what he could do if he ever buckled down and started playing in earnest. Carr and his front-liner partner, trumpeter Terell Stafford, remind me of the Brecker brothers, saxophonist Michael and trumpeter Randy—purposeful post-boppers with tons of technique and plenty of interesting things to say.

This is only the second album as leader for Carr, who has been gigging around the Washington, DC area since earning a degree in music from Howard University, and his first in more than a dozen years. One can hardly call him a young lion, but he's definitely some kind of beast, on tenor sax or soprano, which he employs on the Burt Bacharach/Hal David standard "Alfie and Reuben Brown's playful "Dixie Pig." Stafford, who's currently the director of Jazz Studies at Temple University in Philadelphia, is an old friend who used to jam weekly with Carr at Takoma Station in Takoma Park, Maryland.

Brown, a DC legend (and one of my brother Tom's favorite pianists), also wrote "Blue and Brown, which, as the title suggests, is a classic blues. The quintet also performs Carr's "Krush Groove and "Just Noodlin' ; the standard "You've Changed ; John Coltrane's reharmonization of the Gershwins' "But Not for Me ; a buoyant bop-centered original ("Pat 'n' Chat ) by one of Carr's main influences, the late Hank Mobley; and Ron Elliston's mellow arrangement of the gospel anthem "If I Can Help Somebody. Mobley is never far from Carr's rearview mirror, nor are Brecker, Coltrane, Dexter Gordon or Joe Henderson, and the session often calls to mind the golden years when Blue Note and Prestige were producing one memorable album after another.

But this is more than a trip down memory lane, as Carr, Stafford and their colleagues keep pressing persistently forward, appending fresh new wrinkles to what has gone before and using a hip vernacular that is thoroughly contemporary in style and meaning. "Alfie works especially well as a perky samba, Carr is smooth and eloquent on "You've Changed, and he and Stafford reach swinging peaks on "Pat 'n' Chat, "But Not for Me and "Dixie Pig." The various rhythm sections (three pianists, two bassists and two drummers take their turns, with percussionist Sam Turner added on "Alfie") understand their supporting role and play it perfectly.

If you've been hangin' and scufflin', lookin' for some bright and daring new jazz to put a smile on your face and a spring in your step, you could do a lot worse than Just Noodlin'.