By DAN BILAWSKY
September 11, 2013
Sign in to view read count 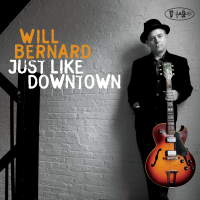 Guitarist Will Bernard has been connected to a number of singular groups and individuals, from the Monk-to-funk outfit known as T.J. Kirk to New Orleans drumming giant Stanton Moore to multi-instrumentalist Peter Apfelbaum's boundary-pushing Hieroglyphics Ensemble, but a common denominator exists in his strongest work with each one: Bernard's best is always rooted in the groove. He has a no-fuss way of establishing and/or inhabiting the rhythmic currents of a song and he puts that skill to good use, once again, on Just Like Downtown.

This quartet date finds Bernard fronting a highly capable—and flexible—foursome. Together, they tackle original soul jazz ("Dime Store Thriller"), Led Zeppelin ("Dancing Days") and Richard Rodgers ("Bali Hai"). Some pieces are brisk and driving ("Sweet Spot") and others like to linger for a while ("Little Hand"), as Bernard and company simply let the music float on by. Most of these musical offerings get to the point right away, but a sense of mystery is occasionally in the air as things coalesce ("Bali Hai") or blow slowly in the Frisell-ian breeze ("P.M. Gone").

Bernard's buddies deserve a good deal of credit for bringing his music to life. They sound good when working from the same playbook as the leader ("Dime Store Thriller"), but they sound great when one person's contributions are thrown into sharp relief; John Ellis' swaggering bass clarinet riff, for example, enlivens the jaunty "Go West," and drummer Rudy Royston delivers a tornado of a performance on the choppy "Safety In Numbers," which also features a beast-of-a-solo from Bernard. Organist Brian Charette—the fourth piece of the puzzle—is the one most responsible for adding color to the project. He brings all manner of sound—both earthy and alien—into the picture.

Just Like Downtown possesses an immediately likeable, unforced quality. The music simply flows when Will Bernard and company get going.