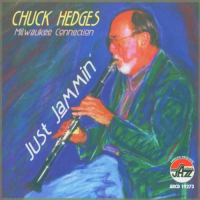 Chuck Hedges would agree that he is a nut who didn’t fall far from the tree. Chicago born and bred, the talented clarinetist settled in Milwaukee, Wisconsin, after touring with Wild Bill Davison, and he still commutes to the Windy City for a regular gig at Andy’s. But he also appreciates jamming with his Wisconsin neighbors, and for some time he has wanted to record with them. (Some of Hedges’ Milwaukee neighbors are commuters, such as Bucky Buchwalter, who returned to music after retiring from 40 years as an executive with Marshall Field in Chicago; and Dave Sullivan, who drives in from Sheboygan.)

Arbors Records has provided him that chance. The result is a gentle album of “swinging chamber jazz, possibly what the pioneering Benny Goodman sextet might sound like today, if BG, Lionel Hampton, Teddy Wilson, et al., were still alive and playing,” as Mike Drew, jazz critic and writer for the Milwaukee Journal Sentinel, opines in the liner notes.

Well, I’m not sure I would’ve gone that far, but you’ve got the idea. From their assurance, musicianship, blend, and joie de vivre, these are obviously serious jazzmen who enjoy their music-making enormously and want to share it. To be sure, the music is relaxed and easy to share; as I’m listening in my office, my wife walks past the door, stops, and then comes in just to sit and listen for a spell.

This CD provides more than 75 minutes of mellow music on only eleven tunes, so the musicians have plenty of room to stretch out a bit. Ellington’s “Solitude” runs a little more than three minutes, but all the others range between five and ten minutes in length. The longest is also the slowest and moodiest: Victor Young and Ned Washington’s “Ghost of a Chance,” with a delightful guitar quote from “It Might as Well Be Spring,” and tasty solos all around. If you like quotes, listen to Sullivan’s guitar solos: on “I Let a Song Go Out of My Heart,” for David Rose’s “Holiday for Strings”; right at the beginning on “Do Nothin’ Till You Hear from Me,” for Stephen Foster’s “I Dream of Jeanie with the Light Brown Hair”; and on “Samba Dese Days,” for Youmans and Caesar’s “Tea for Two.”

The two most up-tempo tunes are left for near the end: “The Man I Love” and “Samba Dese Days,” Sophie Tucker’s old theme song, with a lilting Latin arrangement of “Midnight Sun” sandwiched in between. Any lingering doubts I might have harbored about the technical and musical abilities of these six musicians have been neatly dispelled, long before the last echoes die out.

Visit www.arborsrecords.com on the web.

Broadway; Do You Know What It Means to Miss New Orleans? Sugar; I Don