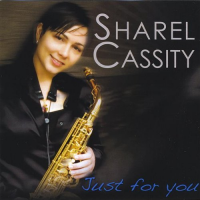 Crafting a wide range of bop-infused musical styles and playing odd-metered grooves on familiar standards to original compositions, alto saxophonist Sharel Cassity presents her recording debut as leader with a truly enticing session of jazz that is Just for You. Based in New York and an educator by profession, Cassity academically trained at both the New School and Juilliard, and is a talented woodwind specialist who also performs on all saxophones, flutes and the piccolo. On this album however, she sticks with the alto and demonstrates her searing chops on the instrument throughout.

Her previous recording experience includes appearing on trombonist Michael Dease's Clarity (Blues Back Records, 2007). Here she returns the favor, with Dease performing and contributing three compositions, including the title piece. Cassity assembles a power-packed woodwind section that, besides herself and Dease, includes Tom Barber on trumpet and flugelhorn and Pete Reardon-Anderson on tenor sax. Altogether the altoist records with a seven-piece light ensemble that delivers a stellar supporting performance.

Cassity kicks off the program in blistering fashion on Dease's rapid-moving opener, "Phibes' Revenge," demonstrating her fiery side. In stark contrast to the hot beginning, the music mellows out on the cushy title tune, which features Dease as well as bassist Paul Beaudry on stylish solos. It is Cassity however, who puts the exclamation point on this one with one of her better performances of the album.

One piece not to be missed is Cassity's rendition of Roger Ramirez's classic, "Lover Man," where her soft alto tone sets the stage for pianist Adam Birnbaum's beautiful treatment of the song, ending with a high-register alto phrase. Cassity blends in and becomes one of the guys as the entire horn section kicks in with a terrific Tom Barber arrangement of Lennie Tristano's lively "Wow." She again separates herself from the group, leading the music on Dease's following "Roditi's Dream."

There have been many versions of Ray Noble's jazz standard, "Cherokee," but Cassity provides a special performance here, blowing one mean sax in wicked frenzied fashion. The tune seems to fly by even though Vincent Ector weighs in with a pounding on the drums, a finale over as quickly as it began.

Just for You is a highly enjoyable debuts that begs the question: where has this artist been and why has she not been heard from before? With this very impressive first offering, Sharel Cassity makes beautiful music and does it Just for You.