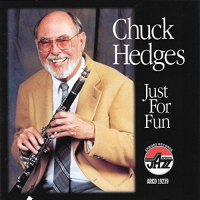 Some elitists persist in thinking that, despite the history of the art form, legitimate jazz today is only made in New York City. Others will agree in concept only if the West Coast is included as well. For those who disagree with both groups, Arbors Records has been a boon. Many releases on this label feature solid, swinging jazz that originates in the great heartland, played by musicians who are less well known but have talent and chops to burn. This is one of those albums.

Chuck Hedges possesses admirable fluency in the language of Dixie-to-swing jazz. Considering his technique, tone, creativity and ability to swing, it is surprising that he is neither better known nor more often recorded than he is. Born in Chicago and raised in the traditions of Laurence Duhé, Jimmy Noone and Johnny Dodds, Hedges cut his teeth in the early ‘50s with cornetist Muggsy Spanier, trombonist Georg Brunis and drummer Danny Alvin, touring with Wild Bill Davison in the ‘70s and ‘80s. Hedges eventually settled in Milwaukee, Wisconsin, although he still ventures back frequently to the Windy City to jump and jam.

Although currently a resident of Fort Lauderdale, Florida, where he frequently accompanies his wife, singer Meredith D’Ambrosio, pianist Eddie Higgins also spent time in Chicago in the ‘50s with the late trombonist Al Grey, drummer Butch Miles, the late, great bassist, Milt Hinton, and the legendary Coleman Hawkins. Ed Metz, Jr., a Dave Tough admirer, is another Floridian, but he was raised in Ann Arbor, Michigan, which bassist Paul Keller calls home. Metz’s pianist father is music director for the Bob Crosby Memorial Orchestra, while Keller has toured with Russell Malone and Diana Krall.

Just for Fun is a laid-back, straight-ahead set of 15 eminently listenable standards, upbeat tunes interspersed with ballads; only the closer is a Hedges original. Highlights include the delightful piano-clarinet counterpoint on “You Stepped Out of a Dream”; the soulful elegance of “Come Sunday”; a bluesy “On the Street Where You Live”; a delectable “If You Could See Me Now,” in my opinion, one of Tadd Dameron’s loveliest ballads; Keller’s recurrent, resonant bass solos; and Hedges’ clarinet throughout, now soaring, now lilting or floating, now swooping, with just a touch of bite...

Although not a regular working band, these four musicians share rapport and a deliciously similar approach to jazz; they swing like a traffic light in the wind, and the fun they’re having is so contagious, they ought to be quarantined. So, you elitists, contrary to your preconceptions, legitimate, swinging jazz continues to be made in the heartland, and you have to go no further than Arbors Records to prove it for yourself.

Visit www.arborsrecords.com on the web.

Night and Day; Old Folks; On a Slow Boat to China; Black Butterfly; You Stepped Out of a Dream; Come Sunday; Deep Purple; Poor Butterfly; On the Street Where You Live; Soon; Nina Never Knew; One Note Samba; If You Could See Me Now; Dina; Just for Fun