By JIM SANTELLA
August 2, 2006
Sign in to view read count 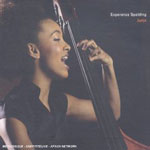 Spalding, who was born in 1984, is younger than most jazz all-stars. And yet the fierce power of her trio proves that these musicians have all paid their dues many times over. The leader, a Portland, Oregon native, graduated from the Berklee College of Music in Boston and now teaches there. Like many of us, she was turned on to jazz by Kind of Blue.

Her pianist and drummer on this date, Aruán Ortiz and Francisco Mela, are from Cuba. She's chosen two of the best for her opening salvo in the competitive world of music. Of her chances, she says, "If your music is meant to be out there, and you stick to it and put everything you have into that, rather than making sure that someone is taking a nice picture of you, it will work. I think she's on her way to certain success. You can't argue with good taste.

Unlike vocalese, Spalding uses a soft, wordless pattern that allows one vowel sound to flow into the next. It's not unlike the Portuguese sounds that often drive a bossa nova. She does sing one song with lyrics on Junjo, however, only to emphasize this point even stronger. "Cantora de Yala, sung in Spanish with nothing more than bass accompaniment, flows naturally with a poignant charm.

The trio's interpretation of Chick Corea's Humpty Dumpty offers the best look at Spalding's bass playing. She likes to move with a comfortable rhythmic drive that never fades. Her concept remains lyrical from start to finish; she creates a focus for her energy and ensures that it follows a path toward beauty. Fresh voices such as this one on the modern jazz scene prove that good taste will always win over greedy ambition.