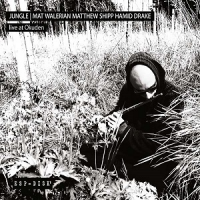 Polish reedman Mat Walerian's second album is in many ways a follow up to his first, Live At Okuden (ESP-disk, 2015). The two CD set was recorded live in Torun in central Poland, as part of Walerian's Okuden concert series, six months after his debut, and similarly features pianist Matthew Shipp. However this time out drummer Hamid Drake joins the pair. Although Walerian is credited with all but four of the 13 tracks, his compositions seem as oblique as those on his previous record, resembling free extemporizations based around tuneful fragments. Certainly they don't constrain either Shipp or Drake, although both are notably sensitive to the leader's trajectory in their accompaniment.

Walerian himself evokes American rather than European sensibilities, with a soulful blues-inflected cry at the heart of his sound, conspicuously untouched by improv sensibilities. Whether on flute, bass clarinet or alto saxophone, his cool yet lyrical stance achieves it's point through melodic figures, only occasionally edging into dissonance. Shipp's unique approach of equal parts insistent chording, bass register stomps and restless quicksilver patterning, remains evident throughout. In spite of Drake's presence a static feel permeates the set, as rhythmic episodes and fractured grooves rarely last long.

Among the highlights are "One For," credited as a traditional, and with hints of a gospel spiritual but without an overt tune, introduced by Shipp in typical fashion before Drake settles into pulsing time. Walerian's alto wail and Shipp's darkening clusters make this one of the most powerful numbers. That unrelenting, spirited vibe continues on "Coach On Da Mic" where Shipp's opening soliloquy swings between spurts and suspensions, before giving way to Walerian's wheedling soprano clarinet and Drake's brushed patter. The cut ends on another high note with one of Drake's patented endlessly varied cantering drum solos.