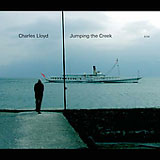 While saxophonist Charles Lloyd made some memorable ensemble discs with the late, great drummer Billy Higgins—'99's Voice in the Night, '00's The Water is Wide and '01's Hyperion with Higgins—there was always something a little safe about these recordings. When working with Higgins, with the exception of their last release together, '04's duet Which Way is East, Lloyd seemed to ground himself in more mainstream territory than he did on his more broadly-reaching '90s albums with pianist Bobo Stenson and bassist Anders Jormin. With Jumping the Creek Lloyd returns to more experimental territory, delivering possibly the freest record of his career.

That's not to say that Lloyd's penchant for writing or finding lyrical material has gone by the wayside. But when Lloyd and his current quartet—featuring pianist Geri Allen, bassist Robert Hurst, and drummer Eric Harland—tackle even the most bittersweet romantic material, like the opening Jacques Brel piece "Ne Me Quitte Pas, it's clear that they are approaching it from a more liberated place. And while the quartet comes more directly from the American jazz tradition, there are also distinct notions of the more European impressionism of Lloyd's '90s groups. The result is something of a consolidation and, as Stanley Crouch describes in the liner notes, summation of Lloyd's forty-year musical and spiritual quest.

While Lloyd exploits the inestimable talent and power of the quartet, he also breaks it down into a mix of duo and trio pieces. "Ken Katta Ma Om starts as a loosely-formed duet between Lloyd and Harland—an intuitive drummer who, since emerging on the scene in the mid-'90s, has been garnering a growing reputation with artists including McCoy Tyner and Terence Blanchard—but resolves into a three-way conversation when Allen joins in. Allen, whose recent release The Life of a Song shows just how much she has grown as a player in the past few years, demonstrates the ability to wear many hats—from richly melodic and on form to abstract and unfettered. The title track is a largely free exchange that finds the group exploring the various permutations and combinations possible, all within a brief six-minute span.

Hurst, a bassist who emerged in the mainstream with Wynton Marsalis in the '80s, has broadened his reach in recent years with artists as diverse as Lou Rawls, Keb' Mo' and Terri Lyne Carrington. On Jumping the Creek he is equally stylistically unencumbered, as comfortable on the Eastern-tinged "The Sufi's Tears as he is the more swinging, yet still open-ended "Sweet Georgia Bright, which makes up the second half of the "Georgia Bright Suite.

Lloyd's voice has never been better. While sometimes dismissed as a Coltrane knockoff, such direct comparisons miss the point. Truthfully, Lloyd is the sum total of a wider range of musical references that go much farther back. Still, his supple approach and robust tone are instantly recognizable, taking his influences to a more modern musical space; and Jumping the Creek represents a clear highlight in a career filled with memorable milestones.

Visit Charles Lloyd and Universal Classics on the web.