BY DAVID A. ORTHMANN
November 5, 2005
Sign in to view read count 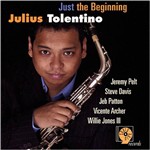 Julius Tolentino is a 30 year-old alto saxophonist who has served a traditional apprenticeship—New York City style—in big bands (Illinois Jacquet, The Ellington Orchestra), small groups (Eric Reed, Jeremy Pelt), as well as leading jam sessions and his own quartet at Cleopatra's Needle, a club that nurtures young, straight-ahead-oriented players. From the sound of his horn on his debut as a leader, Just the Beginning, he's also spent a great deal of time in the woodshed, developing a rich, keening tone and enough technique to get his ideas across.

Tolentino's maturity and willingness to make the record more than just a showcase for his own talent is apparent as he shares the writing, arranging, and solo space with an able crew of band mates. Another positive sign is the patience and attention to detail he puts into sculpting improvisations. He's absorbed vocabulary from a select group of influences including Charlie Parker, Jackie McLean, John Coltrane, Gary Bartz, and Jacquet, and is making genuine progress at finding his authentic voice. Unlike a lot of young, eager saxophonists, Tolentino doesn't immediately reach for emotive peaks that never seem to end. Most of his playing stays on a fairly even keel, working off of solid sets of bebop motifs and making brief, telling digressions.

Although Tolentino is capable of carrying a recording by means of his ability as a soloist, he wisely chooses to make the disc something more than a blowing date. Five of the nine tracks are in a sextet format. The band's sound resembles One For All, the often recorded cooperative band whose skillful arrangements put a fresh spin on the hard bop lexicon. Tolentino shares the front line with trombonist Steve Davis, one of the architects of OFA, and Pelt, a rising trumpet star who appeared with the alto saxophonist on the Sharp Nine Class Of 2001 release, On The Loose (Sharp Nine, 2001). An incisive rhythm section is comprised of pianist Jeb Patton (another member of the Sharp Nine Class of 2001), bassist Vicente Archer, and drummer Willie Jones III, with Pete Van Nostrand replacing Jones on one track. Archer and Jones are an especially potent bass and drums team, on a par with OFA's Peter Washington and Joe Farnsworth.

Beginning with a rhythm section vamp and adding an allied theme for the horns, Jeb Patton's jaunty, Latin arrangement of "Domingo neatly folds into Benny Golson's melody. Cleaving to the rhythm section's straight-ahead 4/4 groove, Tolentino's solo offers a series of tightly knit phrases, sometimes pausing to emphasize a particular sequence but never going slack. Displaying the same fluid intensity, Patton's turn utilizes a firm touch to insert barbed chords in the midst of sturdy single note lines. Pelt jumps out of the gate with a brash phrase and then starts to build, never taking a breath during one audacious 10-bar run.

"High Drama is a typical Steve Davis composition: lengthy, layered, and filled with disparate melodies stitched together in a satisfying manner. Sandwiched between high voltage statements by Tolentino and Pelt, Davis calmly navigates the tune's tricky contours and the rhythm section's skeletal accompaniment. During an extended break from timekeeping, Jones is inspired rather than hemmed in by the presence of a repeated four-bar vamp. Keeping the bass drum tethered to the figure, his pointed, elaborate sticking patterns explore every nook and cranny, momentarily landing in key places even while he relentlessly moves ahead.

Some of Tolentino's most stirring playing of the set is in the company of just the rhythm section, on a ballad rendition of Billy Eckstine's "I Want To Talk About You. Although Coltrane's influence is tangible, Tolentino finds a way to make the song his own, adding variations to the melody each time around, yet always staying close to its emotional core. The same is true for his solo, because he keeps on searching even while maintaining a firm grip on our heartstrings.

Visit Julius Tolentino on the web.