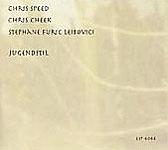 Everything about this extraordinary album, Jugendstil, is deliberate and attains its own level of perfection. To begin with, there is its name: The word Jugendstil (German for "youth style," akin to the French "art nouveau" movement of the late nineteenth century) is so apt, considering that it defines the music contained in this record. For instance just as that art movement was typified by highly stylized and curvilinear forms, so also is the music on this record. Here, the aural replaces the visual form of the art it seeks to represent and the compositions are typified by their stylized phrases that sweep through the senses with notes that create swathes of sound. Sometimes the music in linear and propulsive and at other times it is circular—even like a helix.

Bassist, Stephane Furic Leibovici, composes all of the music for this date. It is defined by the descriptive grammar of the earth—deliberate and flowing organically and continuously until its imperative dénouement—each time the song is sung by the instruments employed to play it. The "Carter Variations" are a completely fresh take on the musical ideas of Elliot Carter, the classical composer who laid out his own music with a high degree of understanding of dissonant sound and rhythmic complexity. It unfolds as the relationship between sound and silence develops—with dynamic tension—throughout the composition.

"Therego" is next; another sophisticated track that ripples and rushes as the musicians pace its development in the sonic landscape. By the time "The Music of Tranquility" begins to unfold, it becomes clear that the genius of this record is to bring together—certainly in this track—instruments that are at opposite ends of the tonal spectrum and that breathe with texture of disparate texture of reeds and woodwinds. Chris Speed's clarinet jousts good-naturedly with Chris Cheek's soprano and tenor saxophones. Furic plucks delicately, creating accents that punctuate the contrapuntal sonic blanket ascribed to the idea of tranquility.

Other compositions, especially "Daffodils," describe one or more scenes from a pastoral setting. Where contrasts come to light as a new sound, emerging as the music is propelled ever onward. "Les nuits de la Chapoulie" is another feature with magnificent interaction between reeds and woodwinds—a tantalizing skipping sense of improvisation and suggested soloing—a contradiction of sorts. It is as if, as Furic states, "This is a night ride, walking the earth...how light and fresh is the morning air."

A better trio could not have interpreted the music. There seems to be a symbiotic relationship between the players. Their performances here are beyond the interplay that describes great trios. Rather it is as if the challenging compositions have been given a life all their own by the brilliant interpretations of the improvisers who play them.

Visit Chris Speed and Chris Cheek on the web.