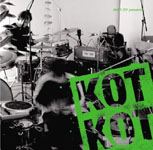 The opening salvo is followed by the subdued guitar and throbbing bass of "Won't U Be My Porcupine," boasting Baptista's echoed vocalizations and a classic Ribot angular run, leading to a pounding percussion duet. The guitarist's clean jazz sound counters the up-tempo rimshots and Jew's harp opening of "My Dentist in Hawaii." Later, he creates sustained tones washed in delay, an idea that he tests further on "Let There Be Light" and "Told You So," reminiscent of sounds from his Scelsi Morning CD (Tzadik, 2003).

Ziv and Baptista also flirt with patterns they played together in their group Beat the Donkey, under the guitar washes of "Dentist" and the rollicking opening of "Told," though with modulated tempos and accents. A "drum 'n' bass" veteran, Ismaily provides a pulsing presence with sound smears rather than articulated notes filling the bottom end. The re-contextualization of motifs shows their malleability and applicability in disparate situations.

After an amorphous introduction, a galloping drum/percussion groove develops on the sprawling "Mono Dream," as Ribot slowly teases a melodic phrase, settling into and using it as a platform for wilder extrapolations. At 76-plus minutes, Alive at Tonic is a healthy portion, and some forays meander. It's a small quibble, easily erased by the insistent rhythm, ardent guitar slashes and funk touches of "Bring Them to Their Knees," a sonic maelstrom as denouement.

Were in Hell; Won't U Be My Porcupine; My Dentist in Hawaii; Let There Be Light; Told You So; Mono Dream; Mute; Makanda; Bring Them to Their Knees.