BY JACK BOWERS
September 21, 2017
Sign in to view read count 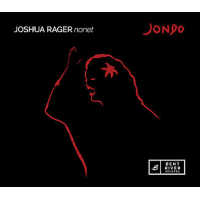 It's hard to decide what to make of this. Canadian-based composer / pianist Joshua Rager has assembled a splendid corps of musicians, nine in all (plus trumpeter Andy King on the three-part "Prodigal Son Suite"), to perform seven of the leader's original themes, one by Andre White and another by the Hollywood songwriting team of Al Dubin and Harry Warren. Rager writes well, perhaps a touch too well, as much of the music veers more toward scholarly than spontaneous, almost as if it were composed for credit in a course on how to design impressive charts for a jazz ensemble.

That appraisal, on the other hand, may be too uncharitable, as there are moments, as on "Child's Play," "The Master Waits" or "Inside Track" when Rager loosens the reins and allows the music to settle into a more unstudied groove. The nonet responds well, amplifying sturdy rhythmic support from bassist Dave Watts and drummer Richard Irwin with persuasive solos by Rager ("Child's Play"), alto Donny Kennedy ("The Master Waits"), Kennedy, tenor Frank Lozano, trumpeter Bill Mahar and Rager again ("The Inside Track"). Speaking of solos, one mustn't gloss over the emphatic statements by Mahar, baritone Cameron Wallis and an (unnamed) guitarist on the even-tempered "Summer Night." The (same?) guitarist (none is listed in the group's personnel) is showcased again on White's shapely ballad "No Goodbye."

It's a pity that all of this comes later, as the album's opening tracks ("Prodigal Son Suite, Parts 1-3," "Jondo") are relatively less engaging. Part 1 of the "Suite" opens with a nine-note theme repeated sixteen times (and again behind Lozano's solo), which some may see as excessive; Parts 2 and 3, combined on one track (it's puzzling to ascertain where 2 ends and 3 begins), are somewhat more animated, with a radiant solo by trombonist Jean-Nicolas Trottier adding luster, while "Jondo" is another well-crafted theme that flows gently along on the wings on Rager's efficient solo without leaving a discernible impression. The scenario brightens on "Child's Play," and the remainder of the album is by and large quite charming.

As for an inclusive assessment of Jondo, the word "uneven" springs to mind, as there are indeed moments of pleasure tempered by others that are less congenial. Perhaps "promising" would be a more accurate appraisal. To sum up, modest marks for the first half of the album, higher scores for the second.