“It’s You or No One” is the standout cut--a five-minute workout that is sprightly and bopping, as much for Sonny Clark’s piano as Griffin’s horn. 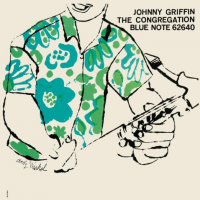 Well, this is a disappointment.

Johnny Griffin is widely regarded as one of the fastest sax players in jazz history. His reputation began with his very first album, Blue Note's Introducing Johnny Griffin in 1956. He solidified his rep the next year with a frantic three-sax attack on A Blowin' Session with John Coltrane and Hank Mobley.

So maybe it's not a huge surprise that Griffin wanted to try something different a few months later, in October 1957. That's The Congregation, an album of pleasant, mid-tempo tunes. If that sounds like damning with faint praise, well, yeah, it is.

This is not the Johnny Griffin you expect. This is jaunty Griffin, occasionally bluesy Griffin, even melodic Griffin. But there is almost no sign of incendiary Griffin, and that's disappointing.

The opener, "The Congregation," is typical. Despite the title, which suggests a gospel number, "The Congregation" is just a conventional tune that sounds vaguely like a 1920s vaudeville/Dixieland piece. It's all very nice and mannered and not the least bit interesting.

"Latin Quarter" starts intriguingly with a slight Latin beat, then turns into another mid-tempo tune. Griffin takes a couple of speedy solos, but mostly it's pedestrian stuff. Even "I'm Glad There is You," a lovely ballad, is taken at an unusual mid-tempo pace. It's pleasant, but nothing more.

"Main Spring," is a wonderfully bluesy tune, but Griffin sounds like 1,000 other saxmen of the 1950s. "It's You or No One" is the standout—a five-minute workout that is sprightly and bopping, as much for Sonny Clark's piano as Griffin's horn. This comes close to the Johnny Griffin we all expect, but it's the only lively number on the album.

In short, The Congregation is nice enough record, but hardly memorable, even after repeated listenings. (Postscript: Check out the Andy Warhol album cover. Very cool.)

Cost: $3 used, but there are better Johnny Griffin records out there