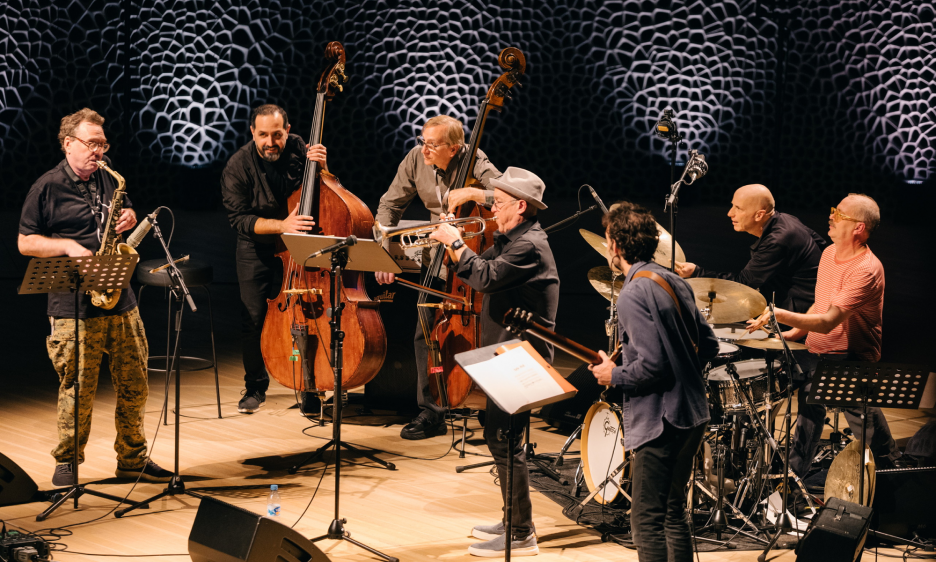 The powerhouse four-day "Reflektor" program constituted an amazing mix of inspired improvisation and sterling recreations of iconic Zorn recordings. Many were nearly exact, live replicas of previous albums while others were reconfigured updates. There was clearly something superb for almost any type of audience in this sixth installment of the Reflektor series and anticipation was palpable along the bustling riverside port. Most performances sold out and audience reactions remained consistently ecstatic during an extended, comprehensive example of Zorn's model formulas for abstract instrumentation and a wide array of sets.

Hamburg is renown as a European musical capitol boasting a brilliantly broad history that ranges from formative, primal pop days of The Beatles to optimal opera or futuristic classical abstractions. Germany's second largest city is also one of the European Union's prime locations for sports, business, and culture in general, as many construction cranes over an increasingly attractive skyline attest to. The picturesque Philharmonic rapidly became a freshly iconic landmark since its official opening in 2017, and cultural mainstay renowned for premium entertainment, superb acoustics and appealing overall aesthetics. The unique 26-story complex houses multiple performance spaces, exclusive apartments, a luxury hotel and a very popular sightseeing plaza.

The Reflektor series was initiated in 2017 and was first presented by Bryce Dessner of rock band The National. Until the Covid pandemic hit, there were usually two or three events annually, most of them of four-day durations with no specifics regarding designation of musical category. Though most mask, vaccination, and testing requirements remained in effect, the Zorn residency constituted a basic return to normalcy. Beside widespread skill sets and creatively curated repertoires, the voluminous history contained in Zorn's selected program covered decades of cultural constructs and compositional foundations. Most of the shows originated from previously recorded group or album titles, and were performed by the same musicians who contributed to the original recordings. The overall result became like a festive holiday feast gathered from Zorn's musical family tree.

Zorn often displayed a gleeful countenance, sitting symbolically at the communal head of a tonal table when he spoke to the audiences. While obviously involved during each set (he introduced and provided background information on everything before watching from the wings), Zorn also acted quite carefree and seemed much less reserved or intensely elusive than in previous EU festival appearances. Perhaps that was because everything including the weather seemed to go pretty much perfectly. The result was a highly engaging experience for attendees, around a third of whom appeared for every performance. Music hall visitors are invited to touch the unique wall paneling, and many in the gatherings did, as if in a phonic petting zoo.

Prior to Thursday's musical start Zorn participated in an hour-long, interview-based discussion with Elb Philharmonic Director Christoph Lieben-Seutter. This event sold out quickly since it offered aficionados a must-see, first-hand look into Zorn's thought process. Another offstage option included theatrical showings dubbed "Zorn on Film," two-hour screenings by filmmaker Mathieu Amalric of his John Zorn Volume 3, a documentary work in progress that will complete a trio of installments which began in 2010.

Later that evening, the first show in the magnificent Grand Hall featured Zorn on saxophone with relatively brief half-hour gigs by his original Masada Quartet (Dave Douglas trumpet, Greg Cohen bass, Joey Baron drums) followed by the New Masada Quartet (Lage on guitar, Jorge Roeder bass, Kenny Wollesen drums). The Masada concepts covered an approximately thirty-year progression from the early 1990s roots of an initial album based on a meld of Ornette Coleman's band and traditional Jewish scales for what Zorn reportedly conceived as "a sort of radical Jewish music," to the most current formation's 2021 release. After splitting an hour that seemed to fly by, the quartets played together, if all too briefly. The audience seemed satisfied, but with only around thirty minutes from either band most fans definitely would have liked to hear more. Zorn introduced every show precisely when scheduled, and each show's running time was exactly as listed in the program.

Friday featured pianist Stephen Gosling, the longtime NYC-based transplant from Britain who presented Zorn's Turner Etudes, a solo keys cycle based on eighteen compositions inspired by the "later sketchbook" of English painter William Turner (1775-1851). Turner kept a titanic trove of developing ideas; it's safe to assume Zorn's stash of ideas for the future is equally deep.

Friday's finale focused on Songs for Petra (Tzadik, 2020) by Petra Haden, with music by Zorn and lyrics by Jesse Harris. Vocalist Petra is one of the late bassist Charlie Haden's children; she was joined by Lage on guitar, Roeder on bass, and Wollesen on drums, revisiting their roles from the original record. Songs like "Easy Time" brought something of a country-tinged finish to the evening and might have been the most accessible parts of the series for anyone unfamiliar with Zorn's catalogue, but realistically almost everybody already knew the drills, and this was one of the first to sell out.

Lest anything beside excellence get too conventional, the weekend held a raucous, midday start derived from Heaven and Earth Magick (Tzadik 2021) in which pianist Gosling and vibraphonist Sae Hashimoto stuck to playing derived from fixed notation while the rhythm section of returning bassist Roeder and drummer Ches Smith detonated their improvisational spectrum for one of the series' most crowd-pleasing shows. Since this quartet had considerable previous experience in the same format before, it shouldn't be said the set was totally unpredictable, but it was definitely wild and definitely appreciated.

The program exemplified a summit of experimental mastery and technical brilliance. Jazz accents were apparent from the participants' many accomplishments, but in a complete series of fourteen shows only two of them featured any sort of brass and beside Zorn's saxophone there was only a single trumpet. What stood out most overall as the concerts progressed was probably the amazing skill of every participant and Zorn's uniquely rare range as a composing conductor and enduring inspiration magnet for optimal participation. By his residency's roaring conclusion it was indisputably clear that Zorn is a truly historical musical character, and pretty much an individual movement in his own right. One has to hope the entire proceedings were recorded and will be readily available soon.