Chanticleer and the Handel & Haydn Society of Boston: John Tavener-Lamentations and Praises 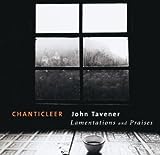 I suspect that this review is untimely with respect to the fact that John Tavener’s Lamentations and Praises, as performed by the all-Male Chorus Chanticleer with orchestral support by the Handel and Haydn Society, won two Grammy® Awards on February 23, 2003. The two awards captured were for the Classical Best Small Ensemble Performance and the Best Classical Contemporary Composition. But further discussion is warranted because of the caliber of this music.

Chanticleer, the Handel & Haydn Society of Boston and the Metropolitan Museum of Art in New York, commissioned the piece from English composer Sir John Tavener, who has been long known for his sacred vocal works. Lamentations and Praises, a "liturgical drama," was composed and arranged specifically for the 12 voices of Chanticleer and the unusual combination of instruments and electronics as presented by the H&H Society. Chanticleer's music director Joseph Jennings conducted Chanticleer and the H&H Society on the recording. "Lamentations and Praises" had its premiere on January 31, 2002 at Stanford Memorial Church and was co-presented by Chanticleer and Stanford Lively Arts.

Characteristic of Tavener's recent compositions, "Lamentations and Praises" was inspired by the composer's Orthodox faith. The title of this liturgical drama is actually a melding of the Greek and Russian Orthodox traditions. The texts are based on a series of Ikons, or conventional religious images painted on small wooden panels and used in Eastern Christian devotionals, derived from Holy Week and further based on The Service of Matins of Holy and Great Saturday. These Ikons are not unlike the Stations of the Cross in Roman Catholic heritage. The Greek Church assigns these texts as "Praises" and the Russian Church uses the term "Lamentations."

Tavener dictated in the score that this music should be performed in the "Orthodox Byzantine Style," requiring a refined microtonal touch in presentation. Tavener further dictated that a Tibetan Temple Bowl and a Byzantine Monastery Bell be struck every twenty beats throughout the work to signify to eternal presence of God. The result is a work of beautiful and powerful continuity, perfectly integrated and perfectly familiar. Chanticleer provides what can only be a perfect performance in the wonderfully informed style we have come to expect from the ensemble. The composition with certainly join Tavener’s other great sacred works. Recordings like this can never be recommended too highly.

Visit Teldec and Chanticleer and the Handel and Haydn Society .