By Doug Collette
December 8, 2018
Sign in to view read count 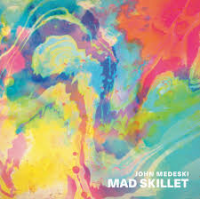 Steeped in, but hardly a slave to, the milieu of the Crescent City, John Medeski (of Medeski Martin & Wood fame) recorded in The Big Easy with sousaphonist Kirk Josephh and drummer Terence Higgins (both natives of New Orleans and members of the Dirty Dozen Brass Band), along with guitarist Will Bernard, one of the unsung heroes of modern jazz. On the opening track titled "Man About Town," as with the like-minded closer book-ending the nine tracks, "The Heart of Soul," the oddly-named quartet is clearly in no hurry to prove itself, yet manages to do so, in no uncertain terms, by the time the record's done.

Here as elsewhere, the foursome moves in a casual strut, its syncopation more implied that outright as Bernard unfurls twisting, turning guitar lines that alternately run parallel to and intersect with the elongated sonic threads spun from the bandleader's organ. At least at the outset here, guitarist Bernard's versatile dexterity distinguishes the sound of the group and its music, although, with all due respect to the namesake leader of this group, perhaps not much more than the founder/keyboardist himself: Medeski plays more organ here than any project in which he's participated in years.

The performance of "Invisible Bubble" is much more forceful, no doubt because the core four engages in both push and pull, sometimes simultaneously, with the horn players that augment Mad Skillet there; By this point, it's become obvious the absence of a bassist is no detriment and sousaphonist Joseph's quick turns on his instrument consolidate that impression, simultaneously whetting the appetite for similar intervals from drummer Higgins. Meanwhile, the prominence of Bernard is an ideal foil for an unconventional lineup, an impression consolidated by Medeski's frequent turns at the organ.

More meticulously arranged than much of what surrounds it, it is fascinating to hear how the expanded unit moves together with such fluidity. Yet, it's little more engrossing than following the nonchalance at the heart of "Tuna In A Can:" the foursome digs into a groove just as naturally as it outright stomps, while Bernard lets rip in a way that's rare for a musician who so prides himself on his understatement and restraint. But the foursome is called 'Mad Skillet' for good reason and, by the time "The Golden Lady" rolls around, Medeski and company offer an implicit declaration of their chemistry. The group sounds all the more unified for its underlying confidence.

Which may well explain why the better part of this eponymous album is comprised of four to eight minute tracks, the action of which is no doubt the distillation of any number of ideas borne in the fortuitous happenstance of improvisation. The piano-dominated "Piri Piri," for instance, is just such a cut, played with a speedy exposition usually the result of jumping on a newly-discovered theme before it's forgotten and lost. And that cut's placement in the exact middle of the track sequence is hardly coincidental; it is the immediate precursor to the ten minutes plus of "Psychedelic Rhino," where the bandleader and producer utilizes multiple keyboards to interweave detailed audio imagery, the detail of which may or may not correspond to the colorful swirls of the cover art, but no doubt required all the expertise of engineer Scotty Hard to properly mix (and may or may not.

Just for good measure, Medeski trots out the melodica later on for "Adele," but here his electric piano notes glisten as opaque synth lines waft in the air. All this action slowly unfolds before the organ rises to the surface, an acknowledgment of its importance in the sound of Mad Skillet, but also a signal to Bernard's guitar, which almost surreptitiously enters this slow-motion, after which the dream-like quality below the surface comes to the fore, thus setting the stage for the home stretch of this extended track and the album at large.

Ending as gingerly as that cut does, the contrasting emphasis in the structure of "Little Miss Piggy" is ideal to allow listeners to regain their bearings. An invitation to dance as much as its predecessor was temptation to space, this cut is no less a pleasure for connecting and extending these diametrically-opposing notions: John Medeski's Mad Skillet is equally capable of conjuring effects visceral and cerebral and comparably delightful to follow on both fronts.