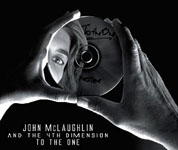 It's seems like a while since John McLaughlin recorded in such a stripped down context with a working band. Recordings such as Industrial Zen(Verve, 2006) and Floating Point (Abstract Logix, 2008) found the English guitarist in rich compositional form and displaying outstanding chops, but neither project led to the formation of a live band. McLaughlin has been molding the 4th Dimension into a formidable live unit since around mid 2008, so it is fitting that this latest incarnation of McLaughlin's continuing musical exploration finds its way onto record. At just over 40 minutes, the length of an old LP, the succinctness of the recording is perhaps also cause for celebration in times when the 70 minutes plus that is often thrust on the consumer can frequently result in too much stodge and not enough lean meat. The six originals here are refreshingly lean and direct, and the energy of the album sounds as if there was little in the way of overdubs.

With a formidable rhythm section in drummer Mark Mondesir and bassist Etienne M'Bappé (the latter having replaced Hadrien Feraud) driving the unit, the stage is set for some of McLaughlin's most extended and firey—yet controlled—soloing in years. Keyboardist Gary Husband also shines on this recording, and his playing is particularly sympathetic to the leader's musical mindset. Few have delved as deeply into McLaughlin's music as Husband, as evidenced on his outstanding piano solo recording, A Meeting Of Spirits: Interpretations Of The Music Of John McLaughlin (Alternity Records, 2006). The two Yorkshiremen complement each other perfectly, especially on the two slower numbers, "Special Beings" and "Lost and Found," where the emotional content of the music reigns over technical prowess.

The first of these two numbers recreates the atmosphere of the gorgeous "New York On My Mind" from John McLaughlin, Electric Guitarist (Columbia, 1978), beautifully laid back at the outset yet emotionally cutting. Husband and McLaughlin both take extended improvisations which seem effortless, yet which are totally absorbing. The momentum rises and falls continuously, yet almost imperceptibly, with Husband handing the lead to McLaughlin and vice-versa, like a juggling act with complete trust in each other. Tender, joyous and exuberant in turn, this is one of McLaughlin's most striking compositions.

Tender is also an apt word to describe "Lost and Found." M'Bappé's deep, elastic bass sound guides the song, with McLaughlin meditating on his beloved guitar synthesizer. In truth, he has rarely sounded more heartfelt on this instrument, displaying the soft lyricism of a flute. Husband's minimal piano penetrates the reverie in dramatically beautiful manner, and his dabs develop into a teasing run which ends disappointingly abruptly, for this was surely going somewhere quite sublime. Then again, you can't have your 40 minutes and eat it.

There is an air of familiarity about this music, but a lot of that simply has to do with the distinctiveness of McLaughlin's sound and his trademark melodic approach to music making. The pacey "Discovery" sounds like it has been part of McLaughlin's canon since forever, and the quoting of "Lila's Dance" in "To The One," from the Mahavishnu Orchestra's Visions Of The Emerald Beyond (Columbia, 1975) is not a cheap nod to the legion of Mahavishnu fans, but a spontaneous return to a much loved piece of music, something which McLaughlin has always done, particularly in a live setting. Simply listening to his improvisations throughout the six originals leaves no doubt that he is in inspired creative form.

In fact, according to McLaughlin the music is inspired by the spirituality of saxophonist John Coltrane's A Love Supreme, (Impulse!, 1965), a seminal influence on the young guitarist, who when he first heard it had yet to leave his native shores to embark upon his legendary musical adventure that would lead him to trumpeter Miles Davis, the Mahavishnu Orchestra, Shakti and beyond. McLaughlin declares that To The One is about two aspects of his life, music and spirituality, but when has there ever been a time in McLaughlin's 40 year recording career when there was a division between the two?


Tracks: Discovery; Special Beings; The Fine Line; Lost and Found; Recovery; To the One.